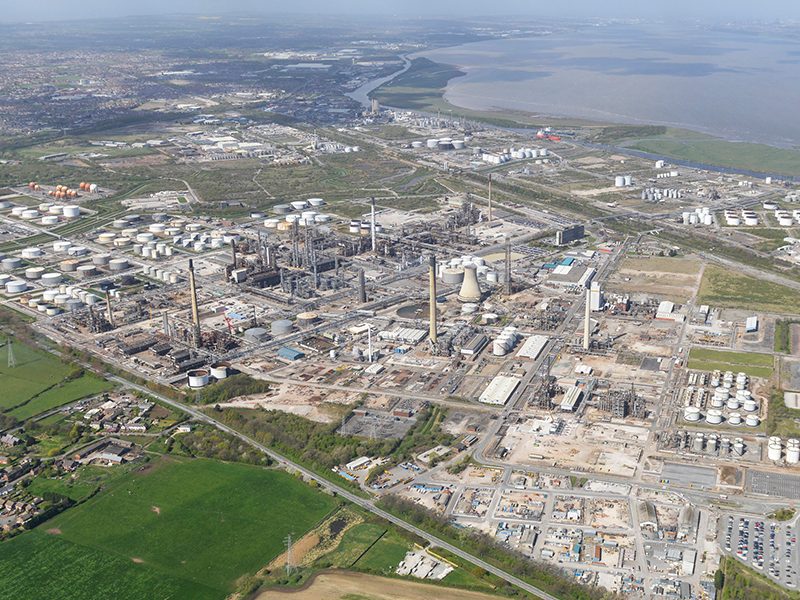 Stanlow, 30th November 2022: Essar Oil UK Limited (“Essar” or “the Company”) today announces its plan to build a £360 million major new carbon capture plant at its Stanlow refinery in line with its ambition to become a leading low carbon refinery by 2030.

Essar is investing over £1 billion into a range of energy efficiency, fuel-switching, and carbon capture initiatives, designed to decarbonise its production processes significantly by 2030 and put Essar at the forefront of the UK’s shift to low carbon energy.

Essar’s energy transition strategy is based on five principles: running the core Stanlow refining processes as efficiently and safely as possible; decarbonising Stanlow’s operations; building a hydrogen future through the launch of Vertex Hydrogen (“Vertex”) and as a key part of the HyNet consortium; developing green fuels (including Sustainable Aviation Fuels); and establishing the UK’s largest biofuels storage facility through Stanlow Terminals Limited.

Essar will achieve its decarbonisations targets through a combination of incremental (energy efficiency and operating improvements) and transformational projects, including the £360 million carbon capture plant announced today, but also as a result of the significant investments Essar is making into hydrogen and biofuels.

Kent plc has been awarded a pre-FEED engineering contract to develop the facility that will take the CO2 emitted from one of Europe’s largest full-Residue Fluidised Catalytic Cracking units, located at the Stanlow refinery.  The gas will be permanently sequestered into depleted gas fields under the sea in Liverpool Bay, as part of the HyNet cluster infrastructure in the North West of England.

Once complete in 2027, the plant will eliminate an estimated 0.81 million tons of CO2 per year – the equivalent of taking 400,000 cars off the road, eliminating nearly 40% of all Stanlow emissions.  The project has been selected by BEIS as a Phase-2 winner in the CCUS cluster sequencing process earlier this summer, and as such, is currently progressing through the due diligence stage.

“This new carbon capture plant is the single biggest initiative to decarbonise our processes and a core element to our hugely ambitious decarbonisation strategy. Our ambition is to become a leading low carbon refinery. This is a massive undertaking, but it is a journey we are fully committed to. Not only is it the right environmental thing to do, it will future proof the critical Stanlow refinery for the long term, protecting jobs and industry, while also placing Stanlow at the very centre of the UK’s energy transition.”

Essar is already making rapid progress against its broader decarbonisation targets. In September, EOUK announced it had signed a ‘Heads of Terms’ offtake agreement with Vertex, a joint venture with Progressive Energy, for the supply of 280MW+ of hydrogen. The hydrogen will be used to help decarbonise Essar’s existing production facilities including the new hydrogen powered furnace [1]which was delivered in August this year.  The £45 million furnace is the first of its kind in the UK, capable of running on a 100% hydrogen source and will replace three existing furnaces at Stanlow.

Vertex is developing the first large scale, low carbon hydrogen production hub in the UK, as part of the HyNet cluster (www.hynet.co.uk). This will produce (in its initial phases) 1GW of hydrogen (the equivalent energy use of a large UK city like Liverpool) and capture some 1.8 million tonnes of carbon per annum. By 2030, Vertex expects to deliver nearly 4GW of low carbon hydrogen, equivalent to c.40% of the UK Government’s national target.

Essar Oil (UK) Ltd is committed to playing a key role in the decarbonisation of the UK economy, with ambitious plans to build an energy transition cluster at Stanlow.  These include the construction of two new low carbon hydrogen production units on site as part of HyNet, with a planned total investment of £1 billon.  Follow on capacity growth is planned to reach 80% of the UK Government’s new target of 5GW of low carbon hydrogen for power, transport, industry and homes by 2030.

Essar is a leading UK-focused downstream energy company whose main asset is the Stanlow Manufacturing Complex, one of the most advanced refineries in Europe situated close to the major cities of Liverpool and Manchester. Stanlow has 800 employees, and is a key strategic national asset, annually producing over 16% of the UK’s road transport fuels, while playing a key role in Britain’s broader petrochemical industry.

Since acquiring Stanlow in 2011, Essar has invested $1 billion in margin improvement and other efficiency initiatives to ensure the refinery remains competitive in a rapidly changing market. The company is a major supplier in the North West and beyond with customers including most of the major retail brands operated by international oil companies and supermarkets, Manchester Airport, leading commercial airlines and the region’s trains and buses.

The Times of India