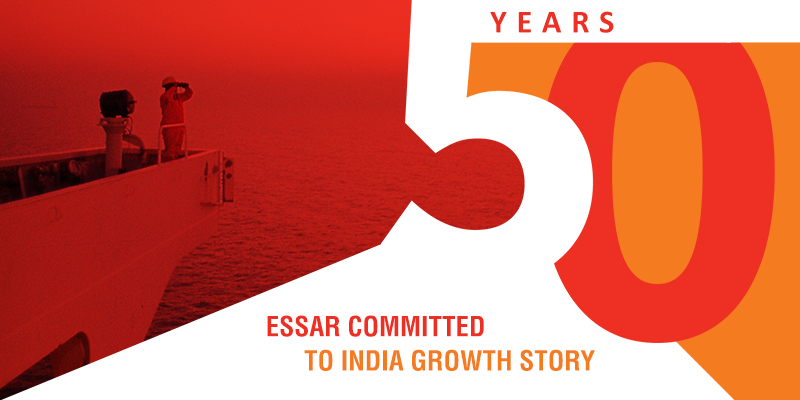 Mumbai, March 5 (IANS) The Ruias-led Essar is committed to the India growth story after an aggressive debt reduction of Rs 1.4 lakh crore over last three years.

This is the message Ravi Ruia and Prashant Ruia have conveyed to banks and fund houses just before Essar’s 50th anniversary celebrations.

The Ruias’ Essar Group has said that after completing its aggressive deleveraging exercise over the last three years, which saw its debt reduce by a staggering Rs 1.40 lakh crore, its quality of earnings is now much more healthy and sustainable.

“Our existing portfolio of companies are firmly rooted in the India growth story and we remain committed to growing the business,” Ravi Ruia and Prashant Ruia said in a letter to bankers and domestic fund houses.

The letter is part of the Group”s efforts to update its stakeholders as it kickstarts its 50th anniversary celebrations.

The Essar Group has indicated that it is “poised to embark on a new phase of growth, while driving growth in its existing portfolio.”

Essar has hinted that its confidence in the future growth prospects comes out of the twin developments of a substantial deleveraging in the balance sheet and strong prospects in the remaining portfolio of businesses.

Essar will continue to use its entrepreneurial skills, vast pool of human resources, and decades of experience and innovation in pursuing fresh opportunities and creating value for all its stakeholders, said the letter jointly signed by Ravi Ruia and Prashant Ruia.

In infrastructure, Essar has said it operates ports and terminals in India, UK and Africa, and has commercial interests in turnkey project construction in India and middle east. In the metals and mining sectors, the Essar Group has exposures in iron ore mining, pelletisation and coal mining in USA and Indonesia.

In new age services, Essar said it has business interests in digital solutions and customer experience platforms in India, Europe and USA. In the energy sector, Essar has noted it has commercial interests in oil, gas and coal bed methane exploration and production in India, Vietnam and Nigeria; oil refining and retailing in UK and power generation in India and Canada.

Essar said that despite major business and regulatory challenges, it has successfully and consistently created world-class assets. The Greenfield assets built by Essar have attracted significant Foreign Direct Investment (FDI) of US $40 billion, which is reflective of the superior and world-class quality of those assets. The Essar Oil-Rosneft deal alone saw over Rs 86,000 crore (US $13 billion) of FDI, the country”s largest until date, it claimed.

Essar claimed to have “built some of the finest assets in these sectors, creating thousands of jobs, and contributing several thousand crores of rupees to the Indian exchequer by way of taxes and royalties.”

“We have fulfilled our Corporate Social Responsibility with focused community uplift programmes in the areas of livelihoods &amp; entrepreneurship, women”s empowerment, health, education, infrastructure and environment.

The positive impact of these initiatives makes a difference in the lives of 500,000 people from 500 villages across 8 Indian states,” the Ruias said in the letter.