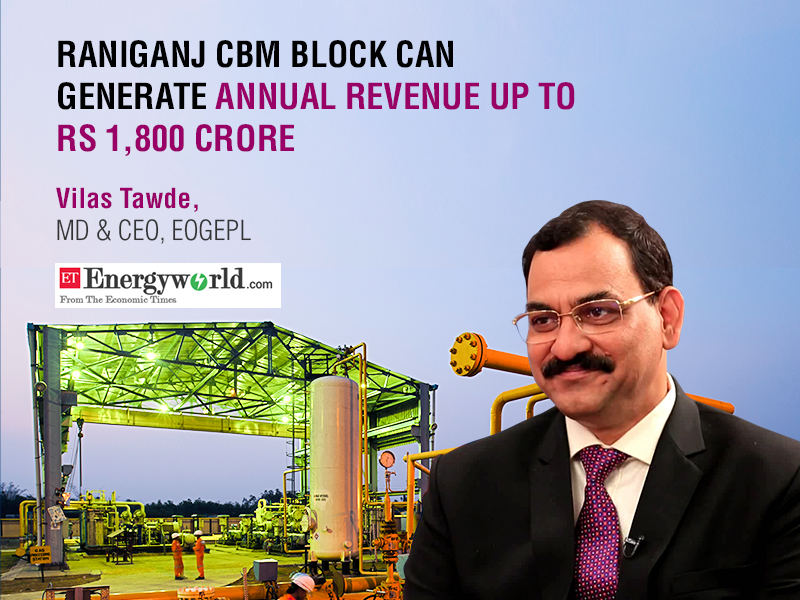 The Raniganj CBM field has 350 wells, associated gas gathering and compressor facilities and about 300 km of infield and customer pipelines. “The company is planning to drill 250 additional wells in the block according to the approved field development plan,” Tawde said in an interview with ETEnergyworld.

The company has so far invested Rs 4,000 crore towards the development of the Raniganj East Coal Bed Methane (CBM) Block in West Bengal which is also the highest producing CBM field in the country having recorded a production of 1 million standard cubic metres per day (mmscmd) of gas.

In August 2018, EOGEPL signed a Gas Sale and Purchase Agreement (GSPA) with GAIL, which provides for a 15-year gas supply contract between the two companies. “The GSPA allows EOGEPL to monetise its entire CBM production from the Raniganj block at a globally competitive price,” Tawde said.

The company has plans to start the balance drilling and associated development task of around 250 additional wells as part of an expansion plan to achieve the sales volume of 2.6 mmscmd. EOGEPL plans to invest around Rs 900 crores over the span of 2 years for this expansion.

“We are eagerly waiting the commissioning of the Urja Ganga pipeline for sale of our entire gas to GAIL as per our gas sales and purchase agreement with them,” Tawde said adding that the company’s immediate priority is to ramp up the production to 1.6 mmscmd from the existing set of wells upon commissioning of the pipeline.

The company has reached a peak production capacity of 1.2 mmscmd in the Raniganj asset. However, due to lack of a sustained gas market, it has maintained a production in the range of 0.5-0.6 mmscmd.

He said that CBM development in Eastern India will be a key focus area for the company since there is lack of conventional oil and gas in that region. Upcoming opportunities in CBM and Shale in the Damodar Valley belt will therefore always be on our radar, he added.

According to the Directorate General of Hydrocarbons, the potential CBM resources in the country stand at around 92 trillion cubic feet (TCF). “Out of the 92 TCF of the estimated CBM resources, about a third is available in the Damodar Valley Coalfields,” Tawde said.

He also said the advantage of the Damodar Valley is that it is already in the commercial CBM projects map of the country. There is substantial additional potential in the coal belt and also in the Coal India leasehold area in the Damodar Valley, which is largely unassessed so far, he said.