Stanlow, 15 January 2018: A local ‘Winter Warmth’ campaign, led by Age UK Cheshire, has benefited from a donation of over £3,400 thanks to fundraising efforts at Essar’s Stanlow refinery in Ellesmere Port.   Employees supported the campaign by raising over £1,700 through collections across the site as they celebrated the festive period with a ‘Christmas Jumper Day’. The figure raised was then matched by Essar.

The festive fundraising efforts have made a great difference to Age UK Cheshire’s local Winter Warmth campaign, which seeks to help those living in the local area that are most vulnerable to cold weather.

The support means that the charity will provide over 130 winter warmth packs to older residents in Ellesmere Port and surrounding areas, with a priority for those most at risk – those who are fuel poor, live alone and are over the age of 85 years. The packs include a hat, gloves, scarf, blanket, thermos cup, thermal socks and a thermometer.

Representatives from Age UK Cheshire joined the fundraising activity on site, and met many of the Essar employees. 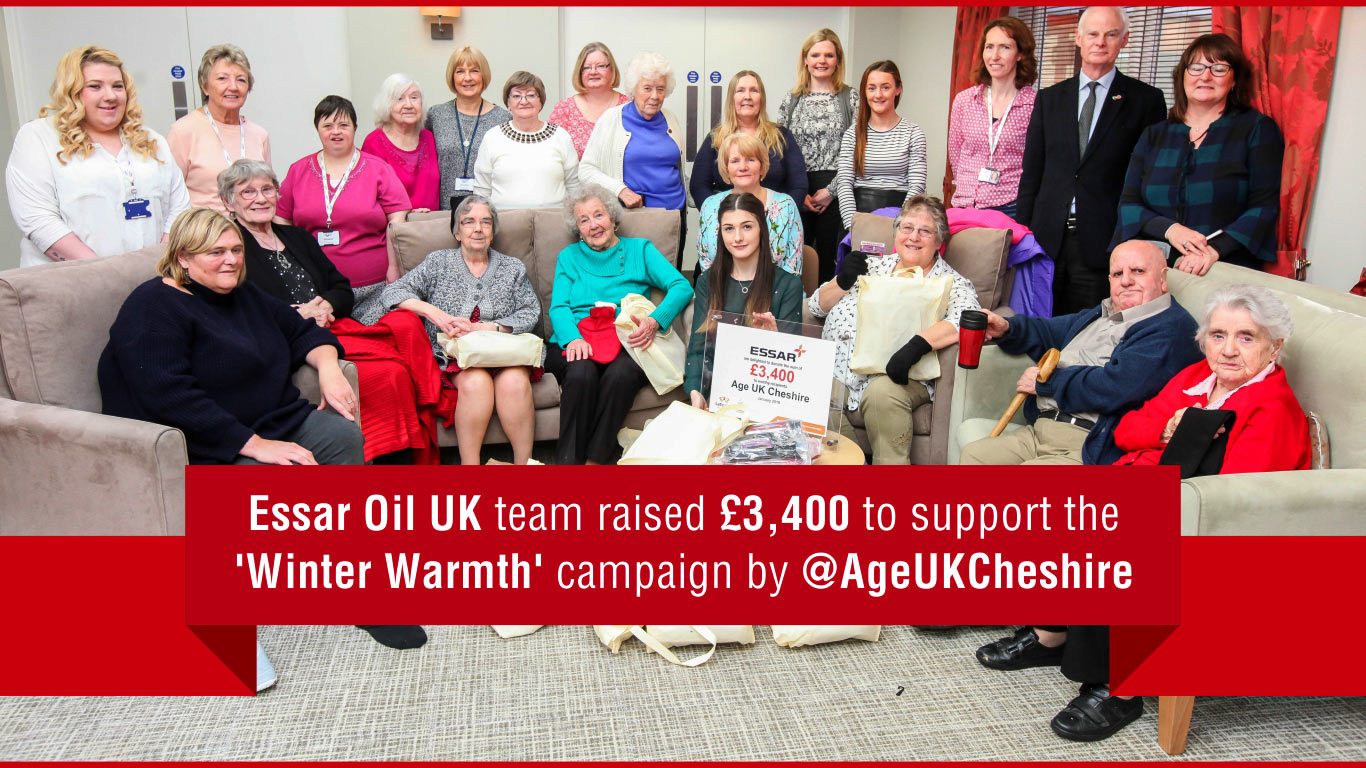 Georgina Alexander-Pulham, Marketing Officer at Age UK Cheshire said: “Winter is an especially difficult time for many older people, bringing as it does a constant worry about how to keep warm and healthy. The winter warmth packs that we have been able to purchase as a result of the generosity of Essar and their employees will bring such comfort to our older clients who really struggle during these colder months.   A huge thank you goes to everyone at Essar for such an overwhelming response.”

Employees from Essar joined one of Age UK Cheshire’s community groups at Hollymere in Ellesmere Port to present the donation and some of the Winter Warmth packs.

Ian Cotton, Head of Communications at Essar commented:  “Age UK’s Winter Warmth campaign is a great way of helping those who particularly struggle at this time of year, and we are delighted our employees’ fundraising efforts are supporting such an excellent service.”

Essar Oil (UK) Limited is a subsidiary of Essar Energy Limited, which owns and operates the Stanlow Refinery located on the south side of the Mersey Estuary near Liverpool. Stanlow produces 16% of UK road transport fuels, including 3 billion litres of petrol, 4.4 billion litres of diesel and 2 billion litres of jet fuel per year.