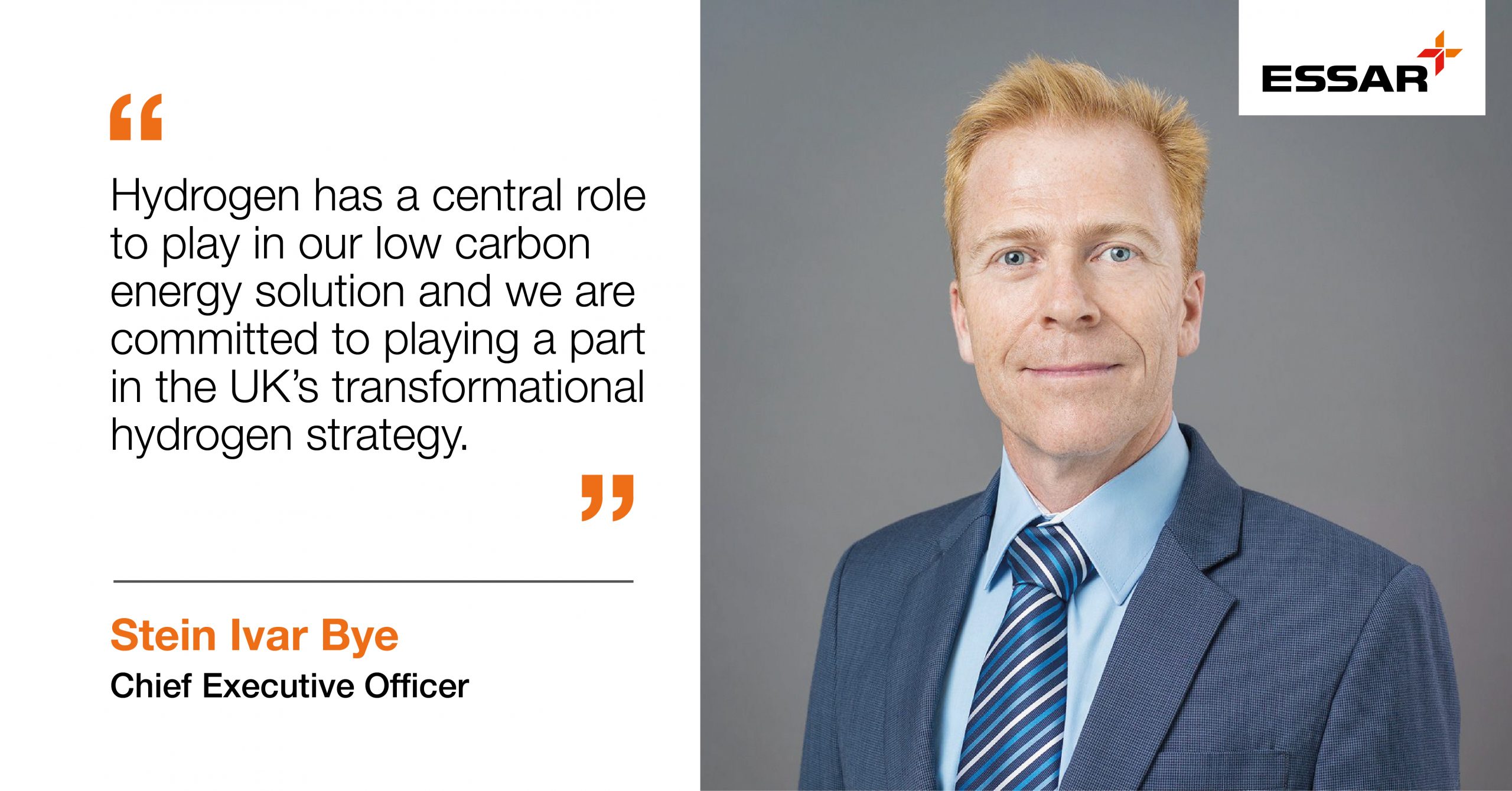 Wednesday 13th January 2021: Essar, which operates one of the leading downstream energy businesses in the UK, and Progressive Energy, developers of HyNet North West, the UK’s leading industrial decarbonisation cluster, have joined forces to set up a venture to produce low carbon hydrogen at Essar’s Stanlow Refinery in Ellesmere Port, Cheshire.

The joint venture will manufacture hydrogen at the refinery for use across the HyNet region. It will provide Essar Oil UK with low carbon hydrogen to decarbonise its own energy demand in addition to creating a hydrogen economy across North West England and North East Wales.

Natural gas, and fuel gases from the refinery, will be converted into low carbon hydrogen, with carbon dioxide safely captured and stored offshore in sub-surface reservoirs in Liverpool Bay. The hydrogen production hub will deliver clean energy to industry in the HyNet ‘low carbon cluster’, as well as to fuel buses, trains and heavy goods vehicles, to heat our homes, and to generate electricity when the sun is not shining or the wind blowing.

The UK’s first low carbon hydrogen hub will initially produce 3 terawatt-hours (TWh) of low carbon hydrogen each year from 2025. This will be quickly followed by a facility twice this size giving a total capacity of over 9TWh of hydrogen per annum, equivalent to the energy used for heating across the whole of Liverpool. A total investment of approximately £750m will be committed to deliver the two hydrogen production hubs. Follow on capacity growth is planned to reach 80% of the Government’s new target of 5GW of low carbon hydrogen for power, transport, industry and homes by 2030*.

The project will use Johnson Matthey’s best in class Low Carbon Hydrogen (LCH™) technology. In partnership with SNC-Lavalin, engineering is well advanced with funding provided by the UK Government’s hydrogen supply competition.

Today’s agreement between Essar and Progressive Energy provides the basis to take the project through final development and into construction and operation. The project will be jointly delivered by the two companies. Progressive Energy originated the HyNet North West decarbonisation cluster, and Essar’s downstream energy activities in the area provide a natural structure for delivery.

“We cannot reach net zero without decarbonising industry. Today brings a key milestone in that journey as Progressive Energy and Essar Oil UK sign a Memorandum of Understanding setting out how we will work together to deliver this exciting project at Stanlow Refinery.
“Delivering net zero requires a transformation of our energy system. HyNet offers a once-in-a-generation opportunity to create real change in energy production and consumption, creating a cleaner world for future generations. It will unlock the low carbon hydrogen economy in the North West, reducing emissions and creating and safeguarding jobs.”

“Essar is committed to innovative growth as a means to create positive impact to both economy and environment. HyNet and hydrogen production is integral to Stanlow’s strategy and will set it on a journey to be the UK’s first net zero emission refinery with the ambition to avoid emissions of over 2 million tonnes of carbon dioxide to the atmosphere per year, the equivalent of taking nearly a million cars off the road.

“With the support from government to establish the appropriate business incentives, together with Progressive Energy, we are committed to undertaking the development and the financing of its construction.

“Hydrogen has a central role to play in our low carbon energy solution. We are demonstrating that the industry is committed to play its part of the UK’s transformational hydrogen strategy.”

“Hydrogen is going to play an incredibly important part in the future of our economy and I hope that Ellesmere Port will play a central role in the green jobs revolution we need to meet the challenge of climate change. Essar has had a presence in the area for the last decade and the signing of this agreement with Progressive Energy means that it will be here for many decades to come.”

“The signing of this agreement is great news for Essar and Progressive Energy. It reaffirms the LEP’s belief that Cheshire and Warrington is at the forefront of developing a new hydrogen economy, and that with industrial partnerships such as this, we can support decarbonisation of key energy-intensive industries, helping government deliver its ambition for a green industrial revolution.”

“This agreement marks a major step towards achieving our ambitions for a carbon-neutral borough in Cheshire West and Chester. It will introduce innovative and world leading technology, a focus for investment in low carbon manufacturing, and create long-term green jobs for the residents of Ellesmere Port and beyond.”

* The Ten Point Plan for a Green Industrial Revolution Building back better, supporting green jobs, and accelerating our path to net zero, November 2020.

ENDS
About Progressive Energy Ltd
Progressive Energy are experts in project development and implementation with extensive experience of overcoming the technical and commercial challenges associated with bringing new technologies to market.

The team are passionate about tackling climate change by creating meaningful and deliverable projects. Progressive Energy translate innovative technologies, such as hydrogen and carbon capture, utilisation and storage (CCUS), into concepts and ideas all the way through to their deployment to make a material difference to climate change.

Progressive Energy originated and leads the development of the HyNet decarbonisation cluster.
www.progressive-energy.com

About Essar Oil UK
Essar Oil (UK) Limited is a leading UK-focused downstream energy company that owns and operates the Stanlow Refinery located on the south side of the Mersey Estuary near Liverpool. Stanlow produces 16% of UK road transport fuels and the refinery processes 10 million tonnes of crude and feedstocks annually.

Since acquiring Stanlow in 2011, Essar has invested $1 billion in the Essar Oil UK business. The site’s largest ever turnaround in 2018 saw the successful delivery of a project that increased annual throughput capacity from 68 million to 75 million barrels, as well as improving yields and driving revenues.

Essar is a major supplier in the North West and beyond with customers including most of the major retail brands operated by international oil companies and supermarkets, Manchester Airport, leading commercial airlines and the region’s trains and buses. It is the lowest cost supplier into the North West and is highly competitive in supplying adjacent markets. Last year, the company acquired BP assets in the Midlands to further strengthen its logistics infrastructure network.

Essar is committed to playing a key role in the decarbonisation of the UK. 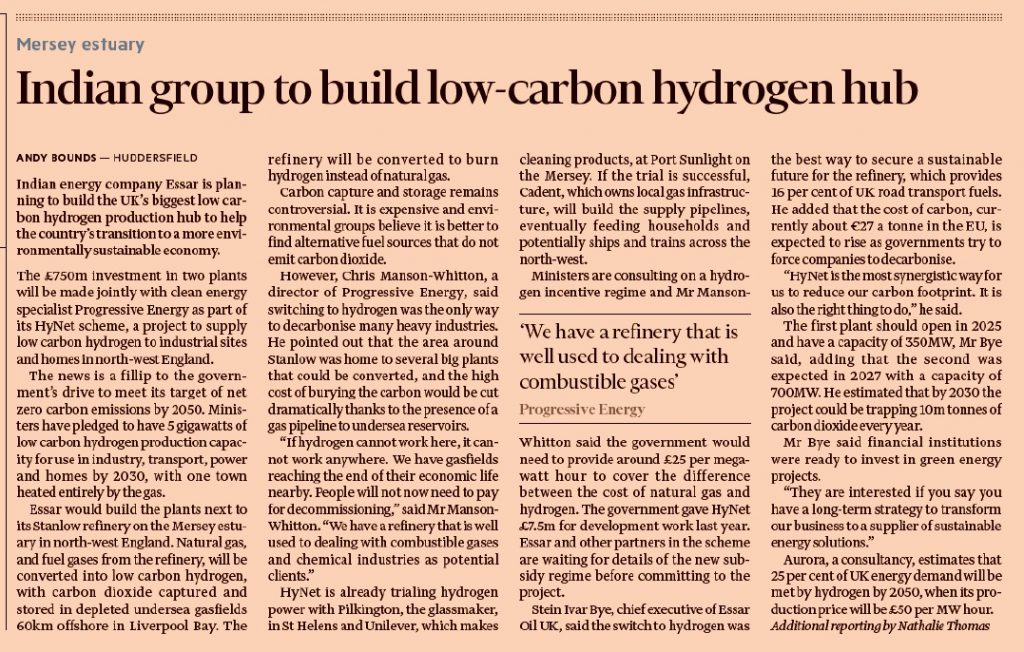