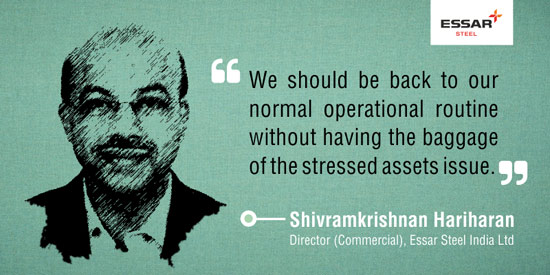 Essar Steel India Ltd., the mill controlled by billionaire brothers Shashi and Ravi Ruia, expects lenders to decide on its debt restructuring plans by the end of this month as the company’s prospects brighten on increased output and an improved domestic demand outlook.

“We are in discussions with lenders and the entire restructuring package should be done by June-end,” Shivramkrishnan Hariharan, the director commercial at the closely held Mumbai-based steelmaker, said in an interview Wednesday. “We should be back to our normal operational routine without having the baggage of the stressed assets issue.”

A revival in steel usage, driven by Prime Minister Narendra Modi’s plans to build infrastructure and smart cities as well as growth in automotive and defense sectors, saw Essar Group raise production by almost half last fiscal year. The mill, which has about 400 billion ($6.2 billion) of debt, according to the company, had been hurt by weak demand, reduced gas supply and lower capacity use at its plants.

India’s stressed assets — bad loans, restructured debt and advances to companies that can’t meet servicing requirements — have risen to about 17 percent of total loans, the highest level among major economies, data compiled by the government shows. Lawmakers recently approved a proposal giving the Reserve Bank of India more powers to resolve the nation’s stressed loans, a majority of which are in the steel sector.

Steel producers in India, which imports about 70 percent of its coking coal needs and some grades of iron ore, found it more difficult to service their debt as higher raw material costs cut into their earnings. Coal prices have come off a bit in the recent weeks and a further correction of about 20 percent is seen in global coking coal rates to $140 a ton over the next couple of months as Chinese consumption declines, Hariharan said.

“We are just getting over the hump” and once the restructuring issues are resolved, Essar Steel will get back to the drawing board to see how it “can join the India steel story,” he said. Production at its plants is forecast to climb to 6.5 million metric tons in the financial year started April 1 from 5.6 million tons last year, he said.

Essar Steel has a mill in Hazira in Gujarat with annual capacity of 10 million metric tons and plans to commission a 6-million-ton pellet plant in Odisha by first quarter of 2018, taking its total capacity to 20 million tons, according to Hariharan.

Growing Demand
Appetite for the alloy in Asia’s third-biggest economy is set to grow 9 percent annually for the five to six years from 2018-19 taking total consumption to as much as 130 million tons, he said. India produced a record 101.3 million tons of finished steel in the fiscal year 2016-17 and consumed about 84 million tons, according to steel ministry data.

The growth prospects, coupled with the government’s policy to make use of domestically produced steel for state-funded projects, will see an influx of foreign companies in the sector, Hariharan said. Essar Steel currently supplies some products to South Korea’s Posco and has a technology agreement with Japan’s Kobe Steel Ltd.