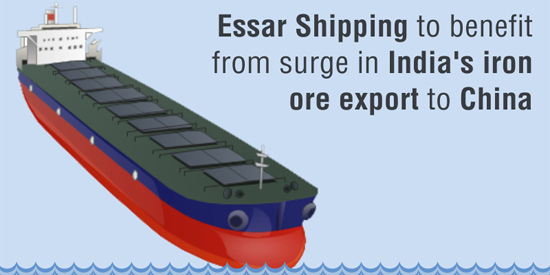 Domestic shipping companies have a reason to cheer as iron ore exports to China witness a surge. With the overall trade scenario in terms of volumes and freight rates, having improved on the India-China route, shipping firms are increasingly deploying large sized-vessels there.

“Until September-October last year, there was not a single vessel getting loaded for China. But in the last few weeks, about eight to 10 vessels have been loaded at Goa to get shipped to China,” said Captain Kiran Kamat, managing director at Link Shipping and Management Systems.

“In coming months, a mad­dening rush is expected on this route as all iron ore exports will have to be done by June, before the monsoon halts activities for over three-four months,” he added.

Unlisted Essar Shipping carried dry bulk cargo of almost 11.5 million tonnes (mt) in 2016-17, up 18 per cent from the previous financial year, the company said in a release last week. More than 80 per cent of the Essar Shipping fleet carries dry bulk cargo, which includes iron ore, coal, bauxite and limestone.

“Our deployment of Supramax-and Panamax-sized vessels on this route depends on the availability of vessels. I agree there is some improvement in freight rates and volumes have picked up, but it’s too early to say if these rates are sustainable,” a senior official with Shipping Corporation of India (SCI) told Business Standard.

The SCI is the largest shipping company in the country, with a fleet size of 69 vessels, of which 16 vessels belong to the dry bulk divi­sion. Essar Shipping, on the other hand, has a fleet of 14 vessels.

In the first nine months ended December 31, 2016, the SCI wit­nessed a loss of Rs.171 crore in its dry bulk earnings, compared to Rs.108 crore in the same period the previous year.

Apart from the SCI and Essar Shipping, Great Eastern Shipping is another big shipping company in the domestic market. However, industry officials are of the view that Great Eastern Shipping may not be too active on the India-China route as most of its vessels are deployed on foreign waters on medium- to long-term contracts.

“Iron ore exports are about 10 mt already between January and March, and we expect this figure to touch 40 mt this year. This will also push up freight rates, and hence Baltic is seen moving in the upward direction here on,” said Rahul Sharan, lead research analyst with Drewry, a maritime research and consulting firm. He refrained from giving a level for the Index.

India exported 21.41 mt iron ore in 2016 from a meagre 4 mt in 2015. India was the world’s third largest iron ore exporter after Australia and Brazil before the government banned the exports in 2011. The ban was lifted in 2014. Prior to the ban, India had shipped more than 100 mt of the commodity, mainly to China in the form of fines.

“Given the thrust China has placed on developing its infra­structure, we expect the country’s demand for iron ore to rise in com­ing months,” said Sharan of Drewry.