One of the first in its portfolio would be a 87.5 Mw project at Datia in Madhya Pradesh 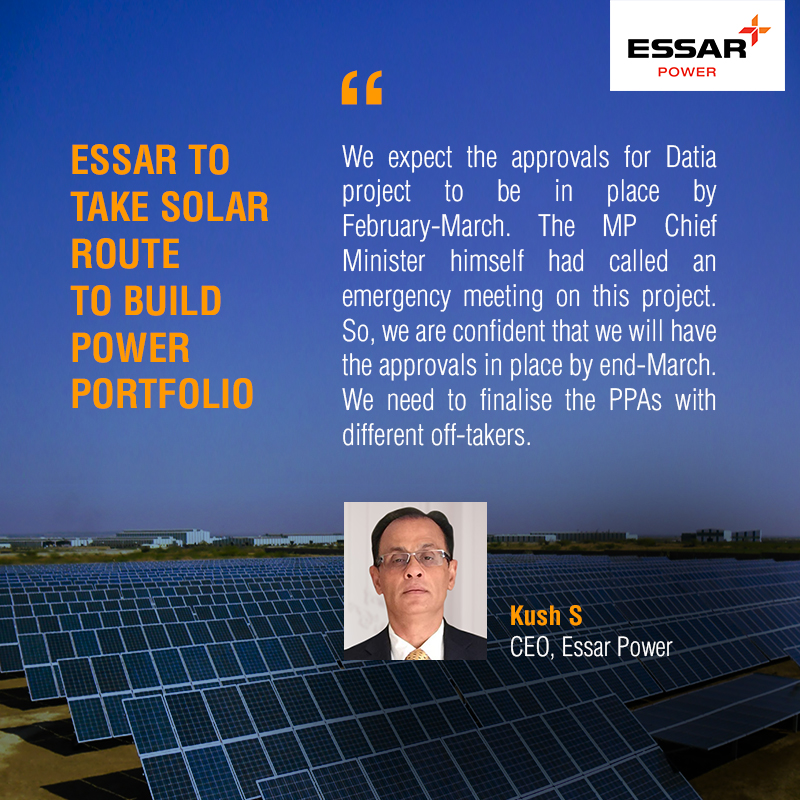 Ruias’-promoted Essar Power is betting on renewable energy to build its generation portfolio. It has firmed up a plan to set up a solar power plant in Madhya Pradesh for supplying to different industries on a third-party basis.
It is also bidding for power purchase agreements (PPAs) being offered by the state government and central public sector undertakings (PSUs). Alongside, it is getting into the business of desalination of water plants that would be fed by renewable power sources.
One of the first in its portfolio would be a 87.5 Mw project at Datia in Madhya Pradesh. Essar Power owns the required land, spread across 104 hectares, Kush S, chief executive officer (CEO), Essar Power, told Business Standard.
Renewable engineering company Gensol has done a detailed project report for the plant for which engineering, procurement, and construction (EPC) tender documents have been completed. The tendering process for the project started this month. The new and renewable energy department of the state has initiated the process for the state Cabinet’s approval for the project. In the application to the state, the company has requested approval for foreign direct investment (FDI).
“We expect the approvals to be in place by February-March. The chief minister himself had called an emergency meeting on this project along with the local MP, MLA and the energy ministry. So, we are confident that we will have the approvals in place by end-March. We need to finalise the PPAs with different off-takers,” he said.
The project would require an investment of Rs 300 crore. “It is being set up on a third party PPA-basis, where there are discussions with different industries in and around Gwalior and Bhopal. Industries that want to make a mark as complete green ventures, would be drawing green power instead of coal and they would get carbon credits as well,” he added.
Essar power has targeted to decarbonise its power portfolio to reduce carbon emissions and mitigate effects of climate change to meet the Paris Agreement’s target of capping global temperature rise at 1.5 C. In line with this, Essar Power has planned to foray into the renewable sector with major focus on battery storage, electric vehicles, integrated water & power projects, biomass and wind energy.
Kush said the company would be targeting firms that are buying power at Rs 6:50- 8, sometimes Rs 4.50-5.30/6.50 a unit for the Madhya Pradesh unit. The 132 Kv power station is in Bhander, which is about 5 kms from the power plant. “The transmission tower will swing on one side and we will be having access to the other. We will pull our conductors to transmit this power from Bhander to Datia and from the Datia substation they will be taken at 220 Kv. By mid- March, the project will be in place. We will then be in a position to submit documents for financial closure, subsequent to which the project takes off,” said Kush.
Essar Power has an operating power generation capacity of 3,185 Mw across five multi-fuel plants in three Indian states and one 85 Mw gas-based thermal power plant in Canada. The company operates 2,400 Mw as an independent power producer (IPP) with plants in Madhya Pradesh and Gujarat. The remaining captive power plants are in Gujarat.
Essar operates a 1,200 Mw imported coal-based thermal power plant at Salaya in Gujarat for which it has a long-term PPA with Gujarat Urja Vidyut Nigam. At Hazira, in Gujarat, the company operates a 300 Mw multi-fuel thermal power plant capable of operating using waste byproducts of steel plant like corex gas, corex fines and coke oven gas, among others. The company operates another 1,200 Mw thermal power plant at Mahan in Madhya Pradesh. This unit was established as a pithead power plant for a captive coal mine allocated to it by the government. However, after cancellation of allotment by the Supreme Court, the plant was unable to bid for long-term PPAs and was in financial distress. The plant is currently undergoing a bankruptcy process initiated by its lenders.
PreviousPrevious post:Sustainable aviation fuel plant set for take off at Stanlow
NextNext post:Essar signs MoU with IIT (ISM) Dhanbad for R&D in CBM gas exploration