OGD-EHES JVP wins yet another contract from ONGC 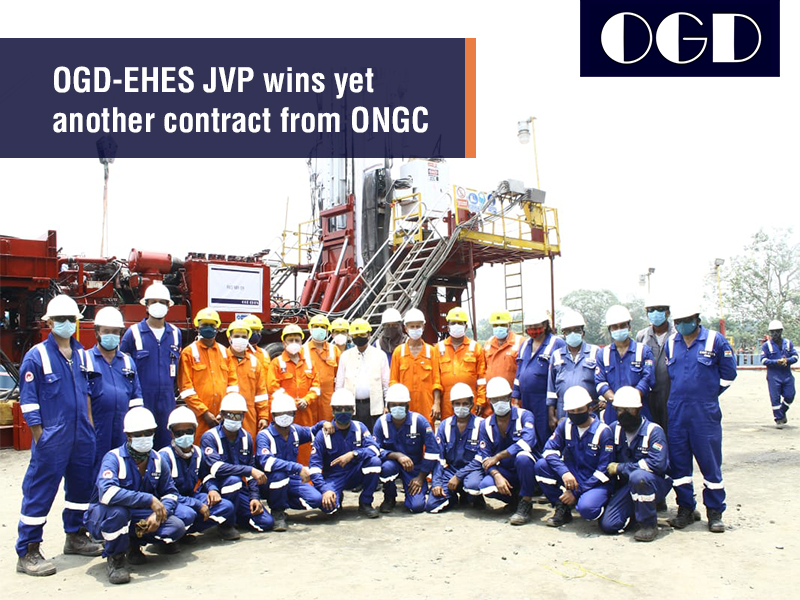 OGD Services Ltd & EHES Ltd (a Joint Venture Partnership) won an award from India’s E&P giant, ONGC, for deploying the CBM specialised drilling rig MR 09 at Bokaro CBM Asset. The rig commenced operations at well JHDP at Chandhankiyari village of Parbatpur, Jharkhand on July 7, 2021. This is in addition to the rig MR 11 which is already operating with ONGC and has drilled more than 45 CBM wells at the same block.

On July 16, 2021, Mr Anurag Sharma, Director-Onshore, visited JHDP drill site where MR 09 was operating. After being shown the rig and its operations he said, “The performance of the drilling services has been impressive and the rig is well maintained with skilled operators. Wishing all the best for continued good performance.”

This contract is expected to generate a topline of USD 11 million, with an EBITDA of USD 1.5 million. The project shall also prove to be a stepping stone for this newly established Joint Venture, and will help position itself as an independent drilling contractor. OGD is the only company in India which owns three custom-made Schramm Rigs that are designed to cater to CBM drilling. One of these rigs was recently deployed with Reliance Industries at their block in Shahdol, Madhya Pradesh, where the rig drilled one of the longest gas wells in India. With the world focusing on green energy, and India too moving towards becoming a gas-based economy, the gas drilling market is expected to grow exponentially in the coming years. OGD’s drilling rigs have a huge potential to tap into this opportunity while contributing to the National interest.

Speaking on the contract, Mr Shaleen Sharma, Director & COO, OGD Services, said “Deploying yet another rig, along with rig MR 11 operating in the same block since 2018, validates our credentials as a world-class drilling contractor. ONGC has reposed faith in us for their drilling needs and this bears testimony to our 25-year expertise in the contract drilling business.”

OGD Services Ltd., a subsidiary of Essar Shipping Ltd., is a contract drilling service provider for oil & gas. Essar Shipping is an investee business of Essar Global Fund Limited (EGFL), whose investments are managed by Essar Capital. Guided by EGFL’s ESG principles, OGD Services is playing a critical role in CBM drilling, and contributing to the supply of green gas. With an international presence, it provides customised drilling solutions to an esteemed list of clients that include international oil majors, PSU’s and private players. The company owns and operates a diversified fleet of 15 Land Rigs with capacities ranging from 250 HP to 2000 HP. It also operates Essar Wildcat, a semi-submersible rig which is known among drilling contractors for its performance and exceptional safety record, having achieved more than 12 years of nil Loss Time Incident (LTI).