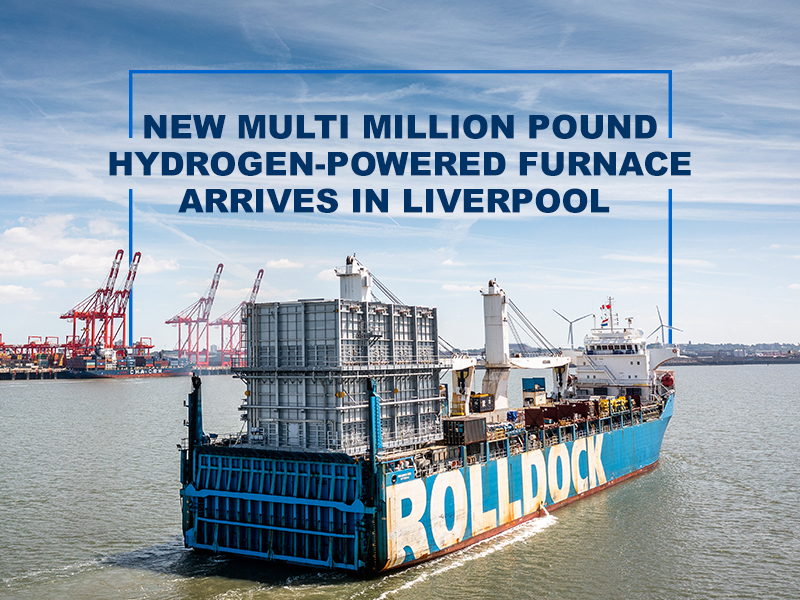 Liverpool, 23 June 2022 – A brand-new furnace capable of running on hydrogen has arrived at Liverpool Port. The furnace, which is part of a multimillion pound investment by Essar Oil UK (EOUK), is heading for Stanlow in Ellesmere Port and will become the first hydrogen-powered furnace of its kind in the UK. It is a vital piece of kit to support the decarbonisation of Essar Stanlow’s operations.

The furnace, which was commissioned by EOUK, earlier this year, arrived by boat on Monday (20 June) and is part of Essar’s long-standing commitment to become the UK’s first low-carbon refinery.

A UK-first, the furnace is unique in that it will run off 100% hydrogen fuel source from 2026. It will run on hydrogen produced as part of the HyNet, which is the UK’s leading decarbonisation cluster. The furnace will replace three existing furnaces, helping Essar to drastically decarbonise their operations and cut their emissions.

The largest single module is 26.5 metres long, by 18.5 metres tall, by 14.5 metres. The furnace will improve energy efficiency onsite and also reduce ongoing maintenance costs. Once its fuel source is 100% hydrogen, the furnace has the potential to reduce 242,000 tonnes of CO2 every year.

The largest module of the furnace will be transported to Essar later this summer via the Manchester Canal and become fully operational in 2023.

The furnace forms a central part of Essar’s strategy at Stanlow to become the UK’s first low-carbon refinery. As well as playing a leading role in the HyNet consortium, Essar is investing in a number of energy efficiency and low-carbon energy and carbon and storage initiatives. Hydrogen used by the new furnace from 2026 will be produced by Vertex Hydrogen, a joint venture launched in January between Essar and Progressive Energy, on site at Stanlow.

Deepak Maheshwari, Chief Executive Officer at Essar Oil UK, commented: “We are pleased that the furnace has arrived in the Port of Liverpool. We have embarked on a major investment programme to upgrade Essar’s infrastructure and future-proof our organisation as leaders in the transition to low-carbon, and this furnace is one of many steps being taken to become the UK’s first low-carbon refinery. The future of decarbonised energy is being built and we are playing a key role in supporting the UK’s plans for building the low carbon economy of tomorrow.”

Claudio Veritiero, CEO of Peel Ports, said: “We are delighted to have played a key role in this important project. As a leading and sustainable Port operator we fully support the transition to hydrogen and the benefits this will bring in the reduction of carbon emissions.

We’re proud to have worked with Essar and other partners to deliver this important element of the project which will position Liverpool and the North West at the forefront of greener energy production. This fits perfectly with our own ambition to become a net zero Port operator by 2040.”

Essar Oil (UK) Ltd is committed to playing a key role in the decarbonisation of the UK economy, with ambitious plans to build a green energy industrial cluster in the North West of England.

Essar is transforming for tomorrow, and through Essar Oil (UK), is leading this change in the UK by developing projects in refinery decarbonisation, biofuels, and new energies logistics to help deliver the UK’s energy transition ambitions.

Essar is a leading UK-focused downstream energy company whose main asset is the Stanlow Manufacturing Complex, one of the most advanced refineries in Europe situated close to the major cities of Liverpool and Manchester.

The company has 800 employees, and is a key strategic national asset, annually producing over 16% of the UK’s road transport fuels, while playing a key role in Britain’s broader petrochemical industry.

Since acquiring Stanlow in 2011, Essar has invested $1 billion in margin improvement and other efficiency initiatives to ensure the refinery remains competitive in a rapidly changing market.  Essar Oil (UK) is committed to becoming the UK’s first low-carbon refinery, investing £1billion over the next five years to support the development of the UK hydrogen economy and to decarbonise its operations.

The company launched Vertex Hydrogen in January 2022.  Vertex is a joint venture between Essar Oil (UK) and Progressive Energy and sits at the heart of HyNet, the UK’s leading industrial decarbonisation cluster.

Hydrogen from Vertex will be used to decarbonise Essar Oil (UK)’s production processes, along with lowering the emissions of other neighbouring business.