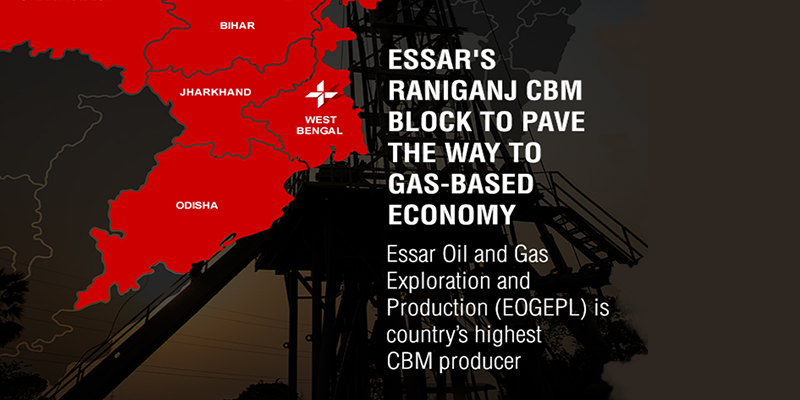 KOLKATA (miningweekly.com) – The imminent completion of a critical natural gas pipeline connecting the northern and eastern Indian states has prompted Essar Oil and Gas Exploration and Production Limited (EOGEPL) to firm up plans to double coal-bed methane (CBM) gas production from its existing Raniganj coal blocks in West Bengal in the east.

EOGEPL will ramp up CBM production from 0.45-million metric standard cubic meters a day (mmscmd) to 1 mmscmd, making it the largest producer of the gas from any single coal block in the country.

The company has already invested $563-million on drilling 348 wells, laying pipelines and other infrastructure at its Raniganj project, but has been hamstrung in ramping up production in the absence of a pipeline network for transporting the gas to the industrial belt in the hinterland.

EOGEPL has been able to touch production levels of 1 mmscmd, but was forced to reduce production in the absence of pipeline and distribution logistics connecting key consumers across the eastern region and neighbouring states.

The Raniganj assets are some of the prime CBM assets in the country with estimated reserves of one-trillion cubic feet of recoverable gas. With distribution infrastructure in place, EOGEPL is also working on the next phase of expansion to ramp up CBM production to 2.5 mmscmd within the next two to three years, company officials say.

With State-run natural gas infrastructure and logistic provider GAIL India scheduled to complete a critical pipeline project by the end of current calendar year, the Essar Group company is well poised to ramp up production of CBM and to enter into supply contracts with consumers across a much larger geography, company officials said.

The GAIL pipeline project will connect Jagdishpur, in Uttar Pradesh, in the north, to Haldia in West Bengal, traversing Bokaro in Jharkhand and Dharma in Odisha. Critically, the pipeline will connect key potential gas consuming fertiliser plants at Sindri, Barauni, Gorakhpur and Panagarh, opening up new consumers for the Essar company.

EOGEPL’s plans for increasing CBM production are significant against the backdrop of the latest government data showing that Indian natural gas production during April to August 2019 was recorded at 13 437 mmscm, down 0.98% over the corresponding period of the previous year. The fall in production has largely been attributed to a sharper fall in CBM production from coal blocks in the states of Madhya Pradesh and West Bengal, which was down by 9.46% at 444 mmscm.