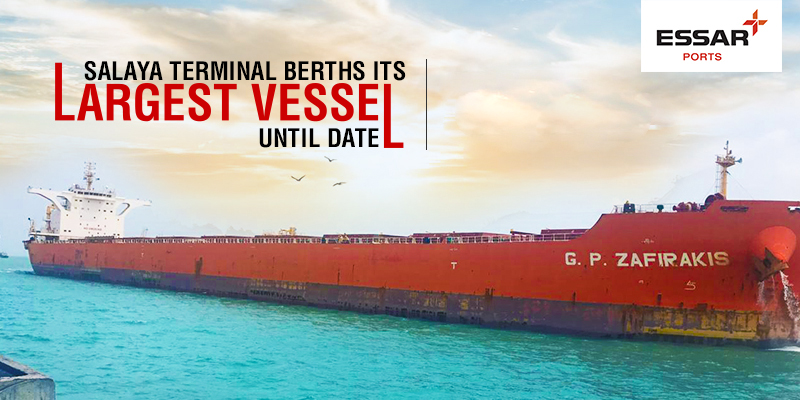 Essar Ports’ Salaya terminal, the deepest draft dry bulk facility in Saurashtra, Gujarat, recently berthed GP Zafirakis, a 165,000dwt Capesize bulk carrier operated by Naraya Energy. This was the largest vessel that the terminal has handled to date and was accommodated after initial lighterage at the Salaya Port Terminal anchorage.

The 20 million tonnes a year capacity Salaya terminal has been built on a greenfield site at a cost of over US$ 300 million and features a 14m draft. GP Zafirakis is the 13th Capesize bulk carrier handled by the terminal since it opened just over a year ago.

Rajiv Agarwal, managing director and chief executive, Essar Ports, says, “As it is close to the Jamnagar petrochemical cluster, the Salaya terminal has a huge potential customer base. Vessels of this size will increasingly become the norm at the terminal.”

The terminal can handle a wide range of bulk commodities, such as coal, bauxite limestone and fertilisers, including both imports and export cargoes. Volumes at the terminal have been increasing steadily since it was commissioned last year. Throughput in the first quarter of the 2019-20 financial year was more than double the same period of 2018-19, Essar Ports states.