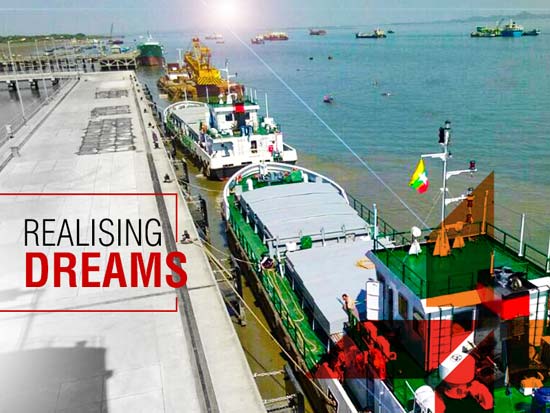 India is linked to its North-East through a narrow passage that goes via Siliguri in West Bengal. Difficult terrain and being landlocked, India’s northeastern states have more than their fair share of challenges to keep the link going with other parts of the nation. Transportation of goods to or from them consume huge amount of time and is extremely expensive. Depending severely on a few states for their access, any natural or manmade issue in that passage simply means reaching northeast is going to be next to impossible. Such isolation purely due to a geographical disadvantage is unfair to a region having immense potential for economic development.

Access and infrastructure being the main cause of concern in the region, India joined hands with Myanmar to think of a solution. The Kaladan Multi-Modal Transit Transport (KMTT) Project was born of this collaboration between the Government of India and the Government of Myanmar. The project will connect Kolkata to Myanmar, and Myanmar to Mizoram through a multi-modal network of ports, inland waterways and highways. It will not only open a second point of entry into the northeastern states of India, but also improve economic ties between India and Myanmar by linking Myanmar to major Indian ports. With the required infrastructure in place, cargo will take about 3-4 days lesser to reach Mizoram from Kolkata and will save more than 950Kms of travel! Needless to say, the KMTT Project is hence dubbed as the “Future gateway to South East Asia”.

Journey of the Cargo the New Way
With the Project complete, the cargo will leave Kolkata and travel 540Kms through ships to the Sittwe port in southern Myanmar. From Sittwe it will travel 160 Kms north to the Paletwa jetty (Myanmar) through Inland Water Transport (IWT) on River Kaladan. From Paletwa, the cargo will take the highways to cross the Indo-Myanmar border to reach Mizoram, covering a road distance of about 200 Kms.

Essar Projects chips in
A project of this scale would mean large scale planning and huge investments, constructing and modernizing Port infrastructure, dredging to help the ports and IWT to support bigger ships and laying roads. Essar Projects was given the responsibility to see through the following elements of the Project through to its completion.

A Project with such an immense strategic value economically and politically had its own share of challenges. But with having more than 4 decades of experience in making mega projects possible, Essar Projects went about delivering on this vision. Currently the EPIL team has completed all the assigned projects as per the contract and is in the process of handing over the finished project. It gives us immense pride to do our bit to a project of such great national importance.

The team wishes the best to the Governments of the two nations for the remaining two segments of the Kaladan project that are at various stages of completion. We hope that the project achieves its objective of improving connectivity with the northeastern states of India,  creating job opportunities for the locals, strengthening Indo-Myanmar economic ties and ushering in a new high for the Indian Government’s “Look East Policy”.