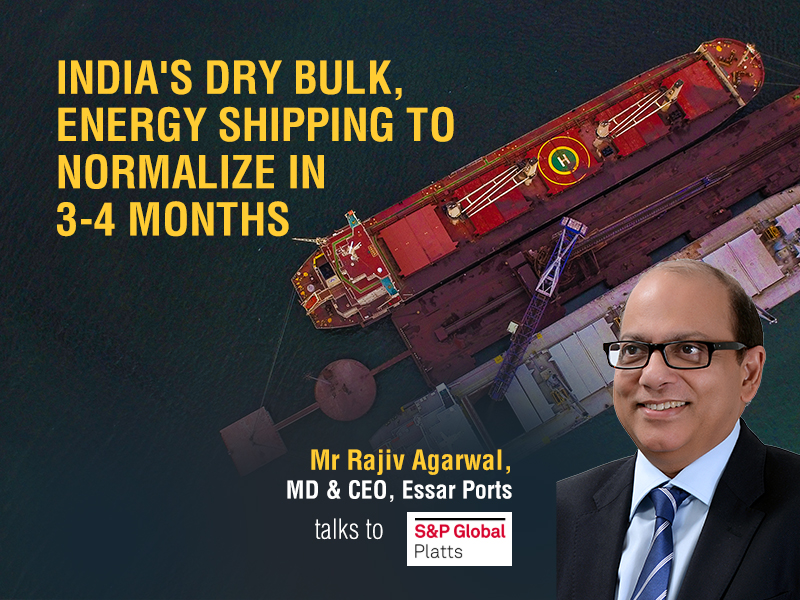 Singapore — Cargo handing at Indian ports is expected to bounce back in May as an extended countrywide lockdown nears an end, but it would take at least three to four months for operations to completely normalize and return to pre-COVID 19 levels assuming there is no further extension, the CEO of Essar Ports Ltd. said.

While handling of dry bulk cargoes such as coal, as well as oil and gas have been largely going on smoothly during the lockdown — since government has classified them as essential commodities — volume revival would depend on how fast import demand and actual domestic consumption for various commodities bounce back, Rajiv Agarwal told S&P Global Platts in an interview.

“I would say volumes at India ports may return to 70-75% in May on an average. But it could take about three months to things to get back to normal,” said Agarwal, who is also the managing director at Essar Ports. “However, a lot will depend on the recovery in consumption of various goods and commodities.”

The 21-day lockdown started March 25 was extended first until May 3 by Prime Minister Narendra Modi and then again for another two weeks to stem the spread of COVID-19 pandemic.

S&P Global Platts Analytics expects India’s oil demand to contract by over one million b/d on the year in the second quarter and to remain lower on the year in H2, taking whole-year demand decline to 355,000 b/d year on year.

The lockdown restrictions in India have had a significant impact on the country’s LNG imports. After surging earlier this year to an average of 28 Mcm/d in Q1 over the same period a year ago, imports have fallen significantly in recent weeks and Platts Analytics expects imports to decline by more than 10 Mcm/d in Q2 relative to 2019 levels during the same period.

Following advisory issued by India’s shipping ministry, all major ports have considered the pandemic as a valid ground for invoking the force majeure clause on port activities and operations.

Agarwal said manpower availability at ports had been down to an average of 50%-55% during the lockdown period, but operations were not affected to a large extent.

“This is not a problem for highly mechanized ports. But for ports which have a lot of manual operations, this has slowed down cargo handling,” he added.

“But at the same time, many of our customers have executed the force majeure clause and the want to defer their commitments. We have to respect that and there is of course no extra charge or demurrage,” Agarwal said. “As a result, demand has come down.”

Policy measures
The Indian government issued a series of guidelines in an effort to cushion the impact of the lockdown on port and shipping operations.

They included allotment of additional land for storage to accommodate the need of port users which are facing issues with respect to movement of cargo, as well as waiver of any penalty charges to port users on account of delay due to delay in loading, unloading or evacuation of cargo.

Some of the other measures include deferment of payment of vessel-related charges by shipping lines as well as waiver on some lease rentals and license fees.

“The relief measures will enable much required liquidity in the system and ease out the cash flow situation which stakeholders are facing on account of disruption in supply chains due to COVID-19,” Agarwal said.

He said that his port as well as other ports were taking sufficient precautions to ensure that the port workers remain free of COVID-19.

“We have managed to keep operations running very smoothly because we have ensured that all the strict guidelines are followed so as to ensure that there is no infection and operations are not disrupted,” Agarwal said.

He added that export of cargoes out of India had been affected to a relatively larger extent than imports.

Essar Ports, with a total 110 million mt/year capacity, has four operational terminals in India across Hazira and Salaya on the west coast, and one each in Visaghapatnam and Paradip on the east coast. The 50 million mt/year Hazira port terminal in Gujarat is an all-weather, deep-draft port terminal capable of handling dry bulk, liquid and break bulk cargo which is under expansion mode, caters to steel and power plants as well as industrial belts in the hinterland.

“With all our terminals operational, we expect to sustain a reasonable level of performance in the ongoing financial year despite the ongoing crisis,” Agarwal said, adding that operational volumes at Essar Ports registered a year-on-year growth of 23.5% in 2019-20 (April-March).

Outside India, Essar’s ports business operates an oil terminal in Stanlow in the United Kingdom, and has a coal berth in the development stage at Mozambique’s Beira port.