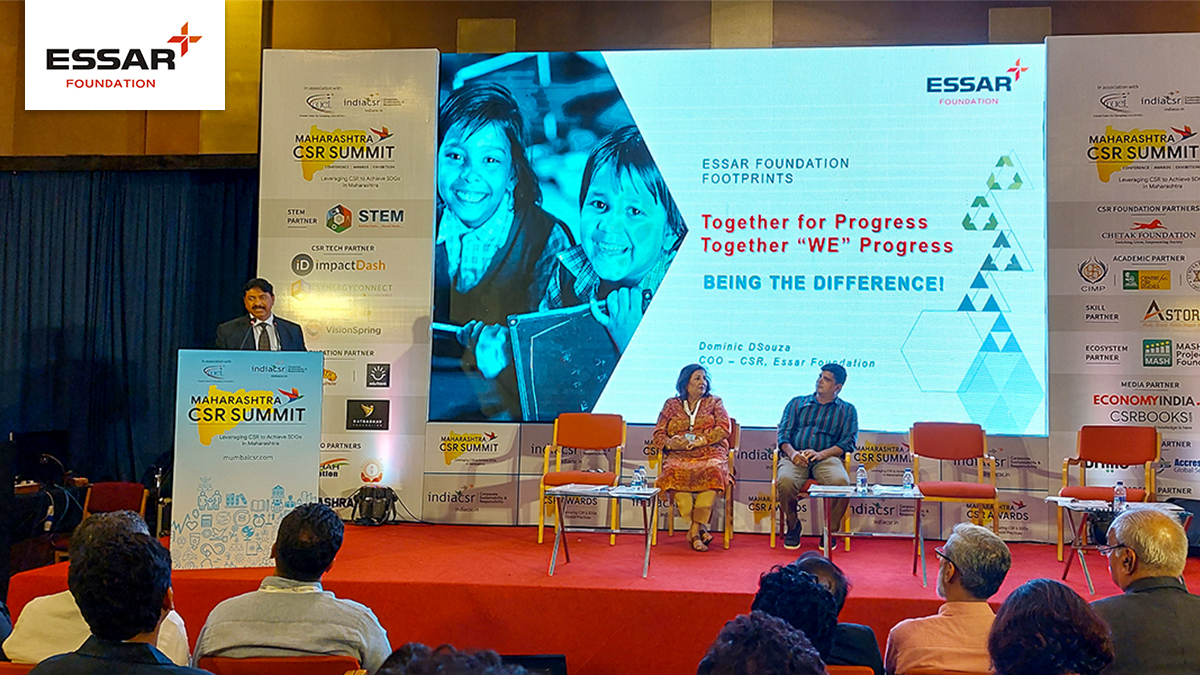 Dwelling on the topic of ‘Gender Equality’ during the Maharashtra CSR Summit organised by India CSR, the Chief Operating Officer of Essar Foundation Mr. Dominic Dsouza said, “Gender equality begins at home and we should create an enabling atmosphere for women not only at home but at work places too, so that they can excel in any given task and work with a sense of belongingness.”

As part of this esteemed panel Mr. Dsouza touched upon the sensitive issue of Gender Equality. He made a brief presentation on Essar’s overall efforts and support to humanity pan India. He emphasized on creating a positive society by following the 4P’s – Power, Passion, People and Progress.

As the Summit was focused on CSR-Maharashtra, he talked about Essar Foundations’ “Mother and Child Malnutrition” project undertaken in the tribal belt in Trimbakeshwar, Nasik District Maharashtra in association with Shri Ramakrishna Arogya Sansthan. He also highlighted rehabilitation of an orphanage in Lasalgaon, Nasik District.

On its mission towards creating a better future for the “underprivileged and marginalised sections of the society”, he then spoke about Essar Foundation supporting the children of St. Francis D’ Assisi Orphanage, Borivali, Mumbai, an orphanage. On the health front, Essar Foundation has also sponsored customised wheelchairs for over 50 patients of the “All India Institute of Physical Medicine and Rehabilitation (AIIPMR), Mumbai”. In the field of education, he highlighted providing educational support to a non-aided government school in Nane Village, Pune District.

He further citied an example of Essar associating with BCCI to provide an opportunity for the differently abled, by giving them the opportunity to experience and enjoy the game of cricket. For the last six years, Essar has been conducting a cricket tournament for the physically challenged called the ESSAR CUP, in Hazira. The cricket matches witnessed huge participation from six states who sent their teams for the tournament. Besides, the company has been proactive in supporting people who are disabled and yet who are able to perform at their best in the field of sports and workplace.

Similarly, in line with its tradition of grooming young talent, he highlighted Essar Foundation adopting a young skater in her quest for national glory. The 8-yr-old girl Durga Gunjal from an orphanage, which Essar Foundation is supporting, possesses exceptional talent in skating. She has already won the inter district championship in the under-14 age category, and has represented Maharashtra State in the recently held national level competition held in Goa. Though she just being 8 years, she proved her mettle and won a bronze at the nationals in Goa in the Under-14 category.

Mr. Dsouza concluded the session by talking about Gender Equality and making a strong statement that “Women have made the difference”. He emphasised on providing more and more opportunities to women. A little aid and a much needed support from the Corporates to uplift these communities and support them will certainly make a huge difference. He ended the session by urging people to make CSR a REASON to build a better India and not an EXCUSE to do CSR out of compulsion.