“Essar Steel has improved its operational performance significantly during 2016-17” 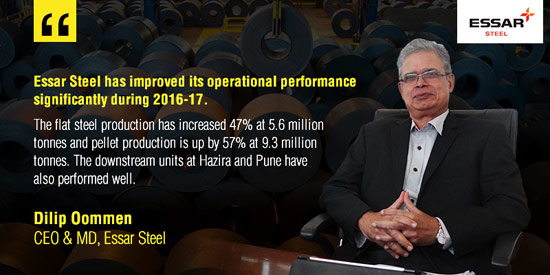 In an exclusive interview with Iron & Steel Review magazine, Essar Steel CEO & MD, Dilip Oommen talks about the company’s performance in FY 2016-17, the production target and turnover expected for the current financial year. He also throws light on the present scenario of the Indian Steel Industry.

Could you give us an overview of the current state of the Iridian steel market? What are the key challenges that steel companies are still facing?

The major challenge that steel industry faces is the continued sluggishness in the demand. Further, strengthening of rupee impacts the performance of steel companies. There is an oversupply situation in the domestic market. We expect that increased funding to infrastructure, road, smart city projects etc. and recent policy announcements to encourage use of domestic steel, which will generate incremental demand for steel. GST can be another catalyst, though one has to wait for 3-6 months for the actual effect to trickle down on demand generation. However, gas-based sponge iron/steel companies will be at a disadvantageous position in the ensuing GST regime, as natural gas is not covered under the GST, which will increase the cost of making steel.

Cheap import has been the biggest threat’ to steel companies in India. What kind of revival have you seen in Essar Steel after the imposition of trade measures like MIP, safeguard and the anti-dumping?

The remedial measures taken by the Government of India have helped the country in containing the dumping of steel at predatory prices. The Government has fixed USD 489/tonne as a reference price for containing imports. This is on lower side considering the volatile global steel market. However, imports have reduced by over 35% to 7.2 million tonnes during the last fiscal. This has brought stability to Indian steel market. All steel companies have been able to come out of the negative effects of dumped imports and have posted better performance for FY17. Essar Steel has increased production by 47% as compared to FY’16.

For the financial year 2016-17, what would you pick as the highlights of Essar Steel in terms of both achievements and challenges?

Essar Steel has improved its operational performance significantly during 2016-17. The flat steel production has increased 47% at 5.6 million tonnes and pellet production is up by 57% at 9.3 million tonnes. The downstream units at Hazira and Pune have also performed well. The focus is on producing value-added steel.

It is seen that, Essar Steel India has reported a production growth of 47% in FY 2016-17 as compared to previous years. Given the tough market conditions, where did the growth come from?

Most of our production is based on firm orders and hence we are able to sell what we produce. Essar Steel has the least finished goods inventory in the steel industry.

What is the production target for the current financial year?

Our current production target is 7 million tonnes and we are on course to achieve this target.

What was the turnover of Essar Steel India in the last fiscal and how much do you expect in FY 2017-18?

We understand Essar Steel has an outstanding debt of Rs. 44,000 crores. How do you plan to pay off your debt?

The outstanding debt of Rs. 44000 cr. includes working capital debt ofRs. 10,000 cr. Essar Steel’s performance in earlier years was adversely affected by various external factors such as disruption of gas supplies, damage to slurry pipeline connecting to Vizag, delay in the environmental approval for Odisha slurry pipeline. Due to these’ reasons and the industry challenges like sluggish demand and dumping by China at predatory prices, the performance of Indian steel companies was adversely affected. The Indian steel companies, including Essar Steel are working with lenders on a comprehensive restructuring plan. This will address the issues of liquidity and long-term sustainability of the business and the debt of the company.

As a CEO & MD of Essar Steel, how do you envisage the future of the company three years down the line?

After the debt restructuring, I see a bright future for Essar Steel propelled by the growing demand and continued support from the Government and Steel Ministry in particular. The long-awaited National Steel Policy has been approved by the Cabinet. In line with this, Essar Steel is taking steps to ramp up capacity by completing unfinished projects like second Pellet Plant in Odisha, , third Continuous Strip Production plant & Coke Oven at Hazira, focus on import substitution by producing more of high-end value-added steel. We aim to bring innovation into play in a big way in Essar Steel to improve efficiency and reduce costs.