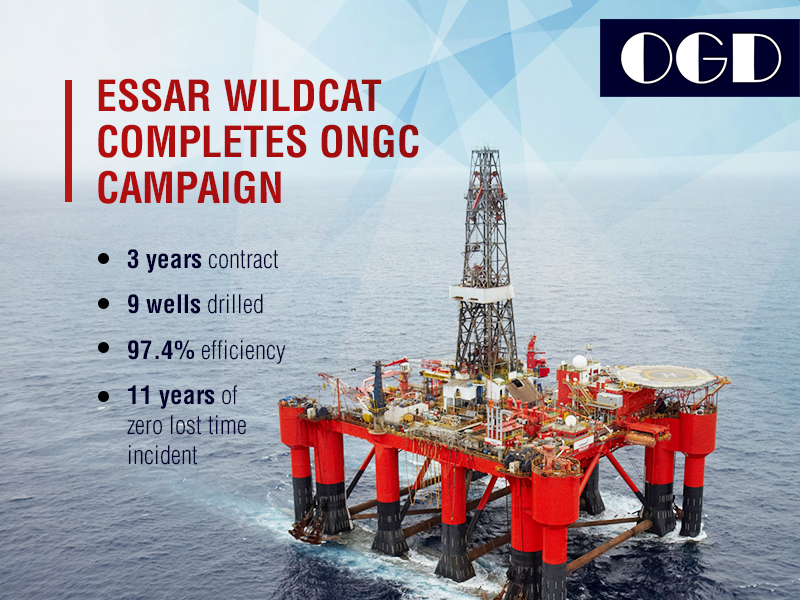 Essar Wildcat, which was working with ONGC Limited in the eastern coast of India since May 2017, completed its three-year contract on June 20, 2020. In this campaign Essar Wildcat drilled nine wells. Amongst these wells, the deepest well drilled had 14,688 feet depth and the maximum water depth in which the well was drilled is 995 feet. All this was achieved with an overall efficiency of 97.4%, which is one of the highest according to industry standards.

Essar Wildcat also successfully completed 11 years of zero-LTI (lost time incident) and received an award from International Association of Drilling Contractors (IADC). She was also awarded by Halliburton for ‘Best performance in Tripping/Circulation – (Deep-water Drilling)’ during the contract. This is a testament of professional approach of the rig crew and staff of OGDSL.

Essar Wildcat has effective policies, procedures and a safety management system in place to ensure the health, safety, welfare and development of the crew. This ensured that the rig was continuously working even during the COVID pandemic, without compromising on crew safety. Proper precautions and tests were performed on each and every member, and strict quarantine rules were followed which ensured continuity of safe operations till the last date of the contract.

We have now additional responsibility to go beyond these benchmarks in the upcoming campaigns of Essar Wildcat, and live up to the standards we have created for ourselves.