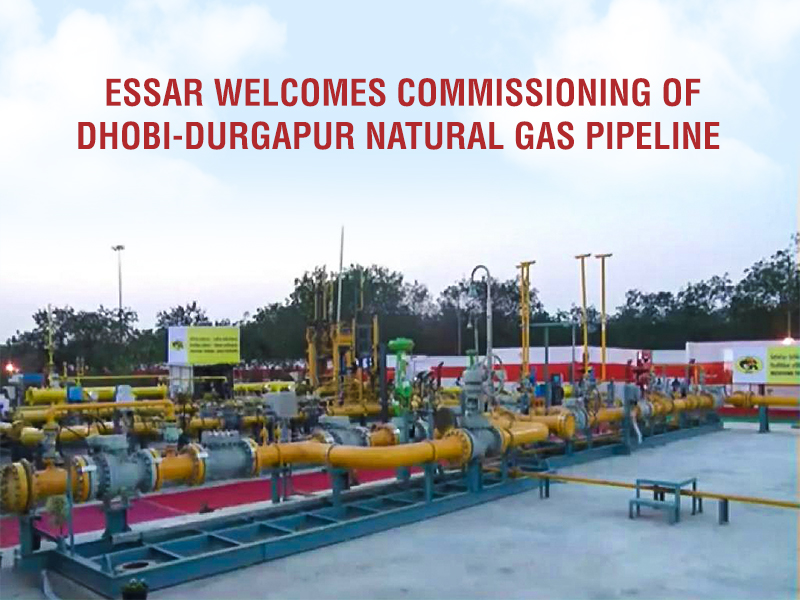 Essar Oil and Gas Exploration and Production Ltd (EOGEPL) witnessed a landmark and a proud moment on Sunday when our Honourable Prime Minister Mr. Narendra Modi dedicated the most awaited 350-km Dhobi-Durgapur stretch of the Urja Ganga natural gas pipeline project to the nation and will soon begin supplies to customers across the region, thus fulfilling its commitment to the people of the eastern India.

The company operates the Raniganj East Coal Bed Methane (CBM) Block in West Bengal. In August 2018, EOGEPL had signed a Gas Sale and Purchase Agreement (GSPA) to sell gas produced from the block to state-owned gas utility GAIL (India) Ltd for a 15-year period. Essar has invested about Rs. 5000 crore towards developing the entire Raniganj asset over many years.

EOGEL had last year reached a peak production capacity of 438 million cubic meters per year in the Raniganj asset and will ramp up production now that the pipeline has been commissioned and expand its customer base from current industries in the nearby areas to far and beyond districts in the eastern region.

It plans to start the balance drilling and associated development task of around 250 additional wells as part of an expansion plan to achieve the sales volume of 1 billion cubic metres.

India is one of leading gas consuming nations in the world and Shri Modi’s vision of having a one nation- one gas grid is an important step in making India a gas-based economy.

The government is therefore focussing on creating a robust gas-pipeline infrastructure network.

The Dobhi-Durgapur stretch of the Urja Ganga pipeline project will directly benefit not only West Bengal but also 10 districts of Bihar and Jharkhand. It will also provide gas as feedstock to fertiliser plants, CNG to vehicles and piped gas to the homes of the region. Next to be completed in this stretch is the Durgapur-Haldia stretch of Jagdishpur-Hadlia and Bokaro-Dhamra pipeline.