Essar Steel to supply 12,000 tonnes of its Rockstar steel plates to fabricate 1,600 excavation and tippers

Essar Steel wins contract to supply 12,000 tonnes of its Rockstar steel plates to build the Turkish Airport, which is estimated to be the largest airport in the world by 2018 (once operational). The steel plates will be used to fabricate 1,600 excavation and tippers. 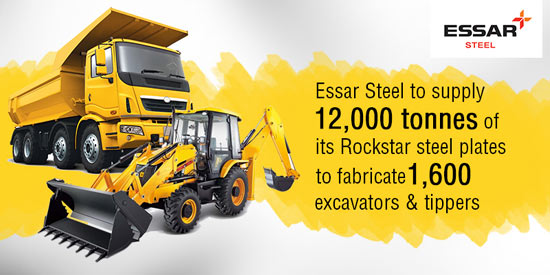 This Turkish airport has an Indian touch

When Turkey will unveil what is touted to be the largest airport in the world in 2018, it will have an India touch. For, Indian firm Essar Steel has outbid global players such as ThyssenKrupp to win a contract for supplying 12,000 tonnes of its Rockstar steel plates, used to fabricate 1,600 excavation tippers. The tippers would be used in constructing what will be called the Istanbul New Airport.

“The airport is expected to handle 200 million passengers annually. To build an airport of that scale, 100 sq km will need to be excavated. A job of such mammoth proportion means 6,000 tippers will be pushed into service,” said Vikram Amin, executive director (strategy & business development) at Essar Steel.

The airport, expected to cost Euro 7 billion, will have six runways. The first phase will end in 2018 and have the world’s largest terminal under one roof, with a gross floor area of 11 million sq ft. The fourth and final phase will be finished by 2028.

For the first phase, Essar will supply 12,000 tonnes of steel. Amin, who expects to supply more in future, termed its association with the Turkish airport project a ‘significant development’, as the market is dominated by US and European plate makers.

“This order has clearly established Essar Steel as a reputed supplier of quality plates to projects of international repute. What is even more heartening is that we have been able to make a foray into a territory that has always been the bastion of global plate manufactures,” he added.

Rockstar is a quenched and tempered steel grade that is part of Essar Steel’s value added portfolio. The plates are abrasion-resistant grade and extensively used to fabricate products in the yellow goods and mining categories.

The order, though in value terms stands at Rs 100 crore for the first phase, has come at a good time for the company, which has been under pressure from lenders. Last November, Essar had appointed ICICI Securities and SBI Capital Markets as advisors to help it identify and induct strategic or financial investors.

However, the company has since submitted a revised proposal to lenders seeking 5/25 scheme for the balance debt.

Lenders have already approved 50 per cent of the debt under the scheme. The current debt stands at around Rs 30,000 crore.

According to the company, the market scenario has improved from last year.

The capacity utilisation has doubled from 35 to 70 per cent in March and is likely to operate at 80-85 per cent in the current financial year.

Production and sales have more than doubled since October, while earnings before interest, taxes, depreciation and amortisation margins have improved from five per cent in November 2015 to 18-20 per cent now.

PreviousPrevious post:Essar Steel receives letter of intent from Odisha government to develop 99-million tonne iron ore block
NextNext post:Essar Steel betters its Lost Time Injury Frequency Rate (LTIFR) to 0.11 in FY 2015-16–an improvement of 39% over an LTIFR of 0.18 in FY 2013-14.