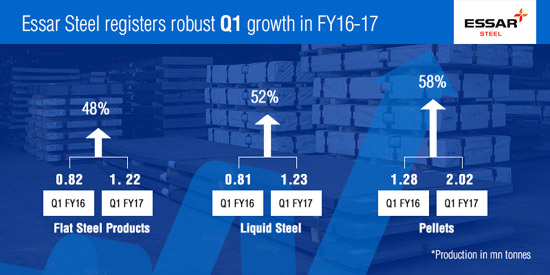 At 78 KT, EStIL’s PPGI (Pre Painted Galvanised Iron) production was the highest ever in a quarter—up by 55% when compared to 50 KT produced in the corresponding period last year.

With the ramp up in production volumes since March 2016, there has been a significant growth in the company’s EBITDA margin and a marked improvement in the debt-equity ratio. The EBITDA margin has increased from 5% to around 20%–which translates to an improvement to Rs 6,000 – Rs 7,000 per tonne.

EStIL’s production ramp-up and its positive impact on the financials has been complemented by the introduction of MIP (Minimum Import Price) and BIS standards. Following these measures by the Government of India, Chinese imports of steel at predatory prices has been contained, leading to better sales realisation in the Indian market.

With the availability of its iron ore mines that were recently acquired, and full production at the Pellet Plant, EStIL is poised to maintain production at high levels.