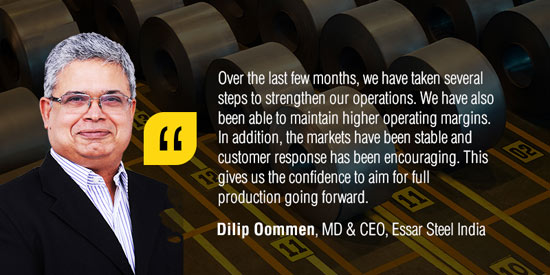 Hazira, 27 July 2016: Essar Steel India has made significant performance improvements in the quarter ended 30 June 2016 on the back of robust production growth. The gross revenues of Rs 4,482 crore in the quarter saw a 12% jump when compared to the revenue of Rs 4,006 crore clocked in the corresponding quarter in FY2015-16.

By the end of FY 2016-17, Essar Steel India expects to record a marked increase in its capacity utilisation, and produce 80% of its rated capacity.

De-commoditising steel
Essar Steel‘s efforts to de-commoditise its steel production and focus on developing value-added grades are bearing fruit. The Company focusses on producing steel that is tailored to customer requirements. This ensures that there is low finished goods inventory, thus saving on working capital.  In the last one year, Essar Steel has developed 17 new grades, which have given it a first-mover advantage in many industrial segments. In the quarter ended 30 June 2016, it developed three new grades—one each in the Automobiles, Yellow Goods and Defence segments.  The new grades enable Essar Steel customers to substitute imported products with indigenous Made in India steel, and make substantial savings. The adoption of multi-modal transport to move its products has helped the company achieve better price realisation and improved logistics.

Commenting on the performance, Mr Dilip Oommen, MD & CEO, said, “Over the last few months, we have taken several steps to strengthen our operations. We have also been able to maintain higher operating margins. In addition, the markets have been stable and customer response has been encouraging. This gives us the confidence to aim for full production going forward.”

Downstream units performing well
Essar Steel’s downstream facility in Pune clocked its highest ever quarterly production. The PPGI production of 78,000 tonnes in the first quarter of the fiscal is higher by 55% than the production recorded in the same period last year. The facility is currently operating at 100% capacity utilisation. Similarly in Hazira, the downstream facilities are running all-out.

Essar Hypermart has recorded a 40% growth in sales volume. The SBU sold 2.89 lakh tonnes of finished steel products, as against 2.07 lakh tonnes in the same period last year. The Hypermart expects to earn US $1 billion in revenues by the end of the current fiscal, and contribute close to 30% of Essar Steel India’s consolidated sales. Essar Hypermart’s fabrication division and eHypermart, the company’s online B2B marketplace, are two SBUs that are also expected to contribute significantly to overall sales.

Reduction in input costs and raw material security
With the natural gas price plummeting to US $6/mmbtu (from a high of US $20/mmbtu), Essar Steel has been able to contain cost, improve margins and ramp up production. The company is looking at restarting all its gas-based DRI units in the current fiscal.

Increased preparedness in managing its input costs has been driving Essar Steel’s operational and financial performance. The Company recently won an iron ore mine in Odisha through the auction route. With an estimated reserve of 99 million tonnes, the mine will meet 50% of the annual iron ore requirement of the company’s Paradip pellet facility.

Both the pellet plants at Paradip and Vizag are now operational and ensure consistent supply of pellets to the Essar Steel plant in Hazira.

Projects completed at competitive cost
Essar Steel has completed all its upstream and downstream projects at a competitive cost to achieve 10 million tonne of integrated capacity. All its units, including many of the gas-based DRI modules, are now operational. The utilisation of captive gas from the Corex unit and the blast furnace is further aiding operational efficiencies.

Government support to Steel industry
Over the last few months, the introduction of MIP and BIS standards by the Government of India has been beneficial in curbing the import of steel at predatory prices. The oversupply situation that was prevailing in the market until recently has been contained to a large extent, and Indian steel companies are now able to achieve better sales realisation in the domestic market.

About Essar Steel
Essar Steel India is one of India’s leading integrated steel producers with an annual production capability of 10 MTPA supported by a 20 MTPA pellet facility. The state-of-the-art facilities comprise iron ore beneficiation, Pellet making, iron making, steel making, and downstream facilities, including a cold rolling mill, a galvanizing  and pre-coated facility, a steel-processing facility, an extra-wide plate mill and 3 pipe mills with coating facilities.
Essar Steel uses information technology extensively for its operation to ensure consistent quality of its products. It produces over 300 grades of steel conforming to quality standards of international certification agencies like API, ABS, NACE, Lloyd’s Register to name a few. The products, many of which are import substitute products, cater to the requirements of a wide cross section of industries.