SAULT STE. MARIE, ON — Essar Steel Algoma Inc. announced today the close of its fiscal year ending March 31, 2015 reporting Rs. 1047.42 cr. (CDN $194.9 million) in EBITDA as compared to an EBITDA loss of Rs. 319.53 cr. (CDN $55.2 million) in F2014. Fiscal 2015 was a milestone year for the Company marked by the successful completion of a comprehensive recapitalization and refinancing valued at US $1.4 billion and a return to profitability with income from operations for the twelve month period ended March 31, 2015 of Rs. 410.05 cr. (CDN $76.3 million) as compared to a loss of Rs. 1,391.56 cr. (CDN $240.4 million) for the same period ended March 31, 2014.    Operationally, the business achieved a CDN $12 per ton reduction year over year in conversion costs while maintaining shipment volumes despite an onslaught of imports and recovering demand. 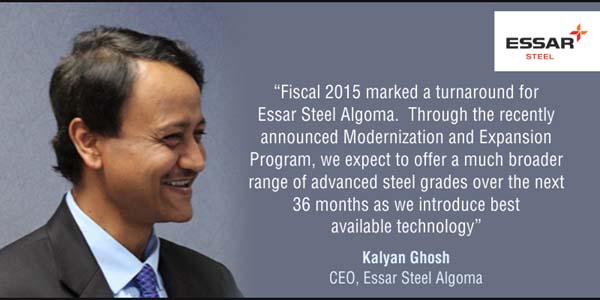 “Fiscal 2015 marked a turnaround for Essar Steel Algoma.  Through the recently announced Modernization and Expansion Program, we expect to offer a much broader range of advanced steel grades over the next 36 months as we introduce best available technology” says Kalyan Ghosh, Chief Executive Officer of Essar Steel Algoma. “When combined with our return to profitability and low cost model, this investment will put us in a much stronger competitive position.”

EBITDA is a non-GAAP measure of profitability, used by management as an indicator of the operational health of the business.

About Essar Steel Algoma Inc.
Essar Steel Algoma Inc. is based in Sault Ste. Marie, Ontario. As a fully integrated steel producer, the company derives its revenues primarily from the manufacture and sale of hot and cold rolled steel products including sheet and plate. Founded in 1901 as Algoma Steel, the company was acquired in June 2007 by Essar Steel Holdings Limited. Its products are sold to customers in the automotive, light manufacturing, construction, shipbuilding, energy, mining and steel distribution industries.