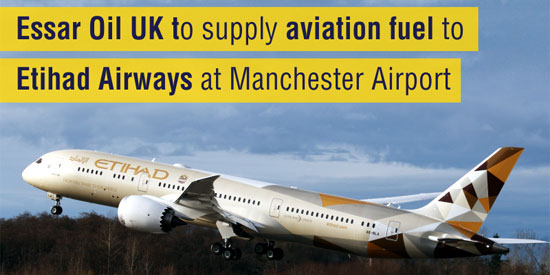 Etihad Airways is the national airline of the United Arab Emirates and part of the Etihad Aviation Group (EAG). It operates two flights per day direct from Manchester Airport (MAN) to Abu Dhabi Airport (AUH). From its Abu Dhabi base, Etihad Airways flies to more than 110 passenger and cargo destinations in the Middle East, Africa, Europe, Asia, Australia and the Americas.

This deal strengthens Essar’s aviation proposition in the UK, with the company now having direct jet fuel supply agreements in place with major airlines operating out of Manchester, Heathrow and Leeds Bradford airports.

Essar Stanlow produces 16% of the UK’s road transport fuel demand and manufactures over two billion litres of jet fuel each year, playing a key role in the country’s aviation industry. It currently supplies, on a wholesale basis, a significant proportion of Manchester Airport as well as Liverpool John Lennon and other regional airports’ jet fuel demand.

S. Thangapandian, Chief Executive Officer at Essar Oil UK, commented:  “This is another significant step in realising our objective of value chain integration by combining our refinery supply strength with our marketing capabilities in the aviation sector.  This is aligned with our strategy of expanding the downstream presence of the business.”

S B Prasad, Chief Commercial Officer at Essar Oil UK, added:  “This deal firmly demonstrates our commitment to achieve further growth in the aviation sector in support of our airline partners.”

This new agreement with Etihad Airways is the latest development in Essar Oil UK’s strategy of downstream integration, which has also seen a successful entry into the UK fuel retail market with the opening of 33 Essar branded service stations to date.

About Essar Oil UK
Essar Oil (UK) Limited is a subsidiary of Essar Energy Limited, which owns and operates the Stanlow Refinery located on the south side of the Mersey Estuary near Liverpool.  Stanlow produces 16% of UK road transport fuels, including 3 billion litres of petrol and 4.4 billion litres of diesel, as well as 2 billion litres of jet fuel per year.