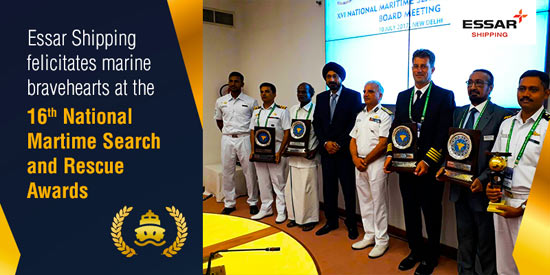 The 16th National Maritime Search & Rescue Awards were held on 10th July at New Delhi.
Every year since 2005, Essar Shipping (ESL) encourages the brave men and women of the Indian Coast Guard, who perform the task of Search-and-Rescue along the Indian coast.
ESL’s contribution also encourages the brave fisherman who go beyond the usual act of service to humanity and display great courage and sense of responsibility. At the meeting, the Coast Guard highlighted initiatives being undertaken for improving the search & rescue infrastructure . Several guidelines, policies & procedures were updated on national search & rescue plan.

1)    The first went to ICGS (Indian Coast Guard Ship) Anmol,  which rescued ten crew members of IFB Sanchay Kari stranded for 3 days in high seas due to its engine beakdown  , 16 lives rescued of IFB Dayamoyee stranded for 4 days due to engine breakdown and rescue of 20 IFB’s with 257 crew members from West Bengal stuck amid depression were towed safely to the nearest . The rescues were conducted in very severe weather.

2)    Mr. Subramaniam , owner of a Fishing Boat , received a cash award and citation for his act of valour in 2 rescue incidents on the high seas , one for saving the lives of 5 stranded fishermen off the coast of Nagapattinam and second for the rescue of 2 Sri Lankan nationals. Essar instituted this award –for mariners of the fishing community – five years ago.