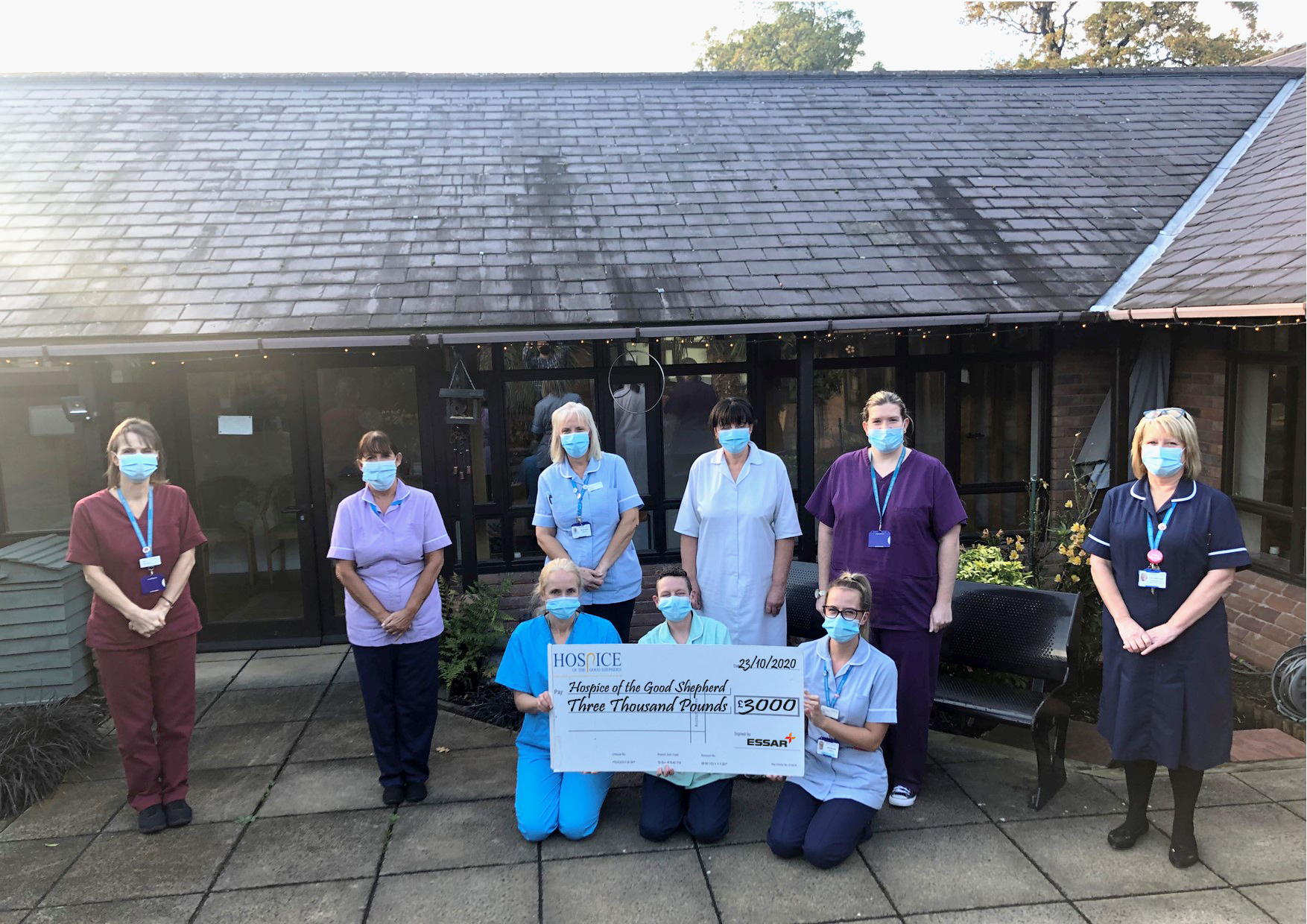 October 29, 2020: Employees at Essar Stanlow have been able to make a valuable difference to a cause close to their hearts, thanks to the company’s Let’s Give programme.

The initiative links safety achievements and charitable giving, with donations made to local charities nominated by employees. A £3,000 donation to The Hospice of the Good Shepherd came after Essar recently recorded two million working hours without a Lost Time Injury.

For over thirty years, the Hospice in Backford has delivered end of life care to patients living with life limiting conditions. It provides a 10 bedded in-patient unit, a Living Well Centre that offers day support to help patients maintain their independence and stay at home longer, as well as bereavement support across its catchment area. In the last year, almost 1,000 families have benefited from the combined services of both the Hospice and the bereavement team.

Essar Production Specialist, Andy Taft, explained: “When my mother was dying of cancer, the Hospice gave my father and I respite by taking my mum in for a break. Fortunately, this was short term and we cared for my mum at home until she sadly passed away. Whilst this was a difficult time, it was made easier by the support and care from the Hospice. Since then, I lost my father and I cared for him at home, but always knew the Hospice was there if needed.”

Paul Wilcox, Inspection Team Leader, who also nominated the charity, added: “Many colleagues at the refinery and their families have benefited from the care and support the Hospice offers and it is great that we are able to collectively thank them, especially during these difficult times, for the incredible work and services provided to so many local families.”

Justin Caroe, Community & Events Manager for the Hospice, commented: “We are delighted to receive this generous donation from Essar, which will make a huge difference in allowing the Hospice to continue providing vital services to the community. We continue to source and raise funds on a daily basis to allow our Hospice to remain open, and whether its company or individual funding every penny is a step closer to a more sustainable future for us.”

The Hospice is currently facing an unprecedented financial crisis due to the impact of the Coronavirus pandemic and could run out of money in a matter of months. Not part of the NHS, the Hospice receives only 25% of its income from government funding, meaning it has to raise just over £3 million each year from donations, fundraising events and its charity shops, which have all been severely affected.

It is anticipated there will be at least a £1.1 million shortfall in fundraising for this year, so the Hospice continues to collect funds through its #SupportYourHospice appeal JustGiving page. You can donate to the Hospice via: www.justgiving.com/campaign/saveyourhospice or by calling 01244 851811.

Essar Oil (UK) Limited is a leading UK-focused downstream energy company that owns and operates the Stanlow Refinery located on the south side of the Mersey Estuary near Liverpool. Stanlow produces 16% of UK road transport fuels and the refinery processes 10 million tonnes of crude and feedstocks annually.

Since acquiring Stanlow in 2011, Essar has invested $1 billion in the Essar Oil UK business. The site’s largest ever Turnaround in 2018 saw the successful delivery of a project that increased annual throughput capacity from 68 million to 75 million barrels, as well as improving yields and driving revenues.

Essar is a major supplier in the North West and beyond with customers including most of the major retail brands operated by international oil companies and supermarkets, Manchester Airport, leading commercial airlines and the region’s trains and buses. It is the lowest cost supplier into the North West and is highly competitive in supplying adjacent markets. Last year, the company acquired BP assets in the Midlands to further strengthen its logistics infrastructure network.

Essar has broadened its downstream integration, with an award winning entry into the UK fuel retail market. With 71 sites operational across England and Wales, the company has confirmed ambitious plans to grow its retail network nationally to 400 sites.

The company is also a major player in the wholesale supply of Jet A-1 to a number of major UK airports. Essar has also successfully entered the market for the direct supply of aviation fuel, signing agreements with some of the leading international airlines.