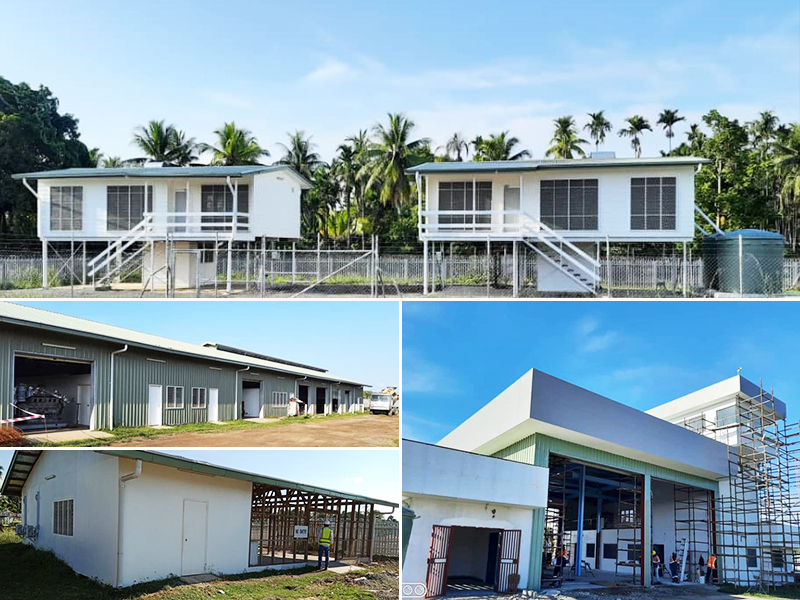 Amidst tough tropical terrain and geographic conditions of Papua New Guinea, coupled with the challenges posed by informal settlers occupying the peripheral land of the airport site and the limitations brought in by the COVID 19, Essar Projects PNG team, unstintingly continued its execution works and has achieved some major milestones in the Madang Airport Project.

Proximity to seashore coupled with peak monsoon brought in the challenges of underground running water during high tides, thus raising the difficulty levels of excavation activity. In order to overcome this challenge, without compromising on Safety, Quality and Cost, EPPNG team deployed used timber box caissons to stabilize the excavation footing, along with continuous dewatering, so as to keep the casting front dry and ready for concreting activity. Good quality timber being widely available in the region, this became a cost effective solution. Further, when flooding led to stoppage in concreting activity, that time was utilised for fabrication of structural columns – something that was initially planned to be taken up later – thus making up for the slippage in the schedule.

During the course of the project, despite the scarcity of skilled workers in Madang and considering that most of the people in the region are farmers and fishermen, EPPNG has successfully accomplished the task of screening local people for their expertise and training them in skills required for project execution; thus adhering to its philosophy of promoting local employment and skillsets building.

Despite all these challenges, the team has achieved some major milestones. The ARFF Building is being completed and the same is expected to be handed over in next few weeks. Renovation of maintenance workshop was completed in April 2021. Construction of Site Engineer’s office was completed on January 2021 and is now in use by the Client.

Further, true to the spirit of bringing in the “Owner’s Perspective” in project execution, EPPNG team brought in yet another value addition. After months of careful review and consideration, the team recommended a shift in the site of the H65 houses for NAC Officers, from originally planned swampy area location with no access to the road to a central location within proximity of other buildings, thereby ensuring ease of access and safety for the occupants. Construction of the said houses in the new site has been completed. All these works were executed while ensuring highest safety & quality standards and compliances as per contract conditions

Expressing his satisfaction over the efforts and achievements of his team, Mr. Srinivas Karri, Country Manager, EPPNG stated, “The value addition done by EPPNG team towards cost optimization and efficient execution of the project, and overall contribution towards giving a face lift to Madang Airport, have been highly appreciated by the Client and local Government authorities, thus enhancing our market position and further strengthening the Essar Brand in the country.”

About Essar Projects and EPPNG: