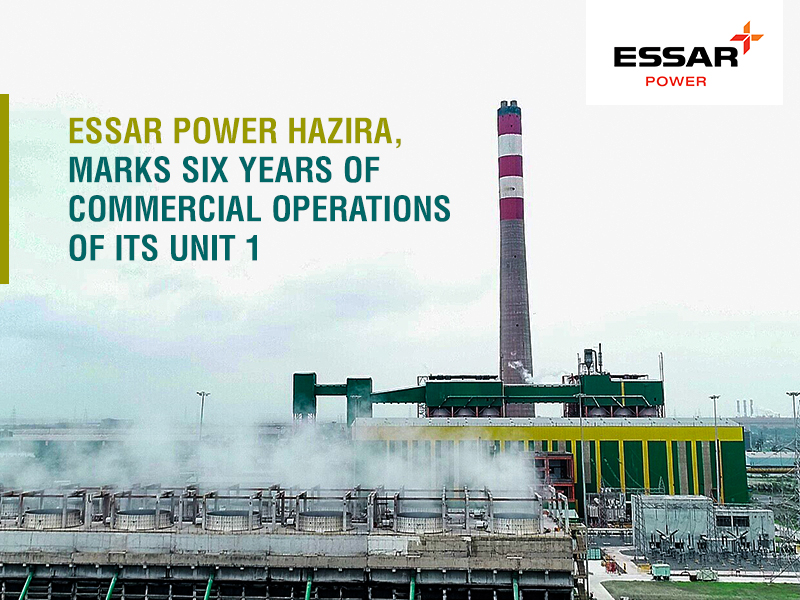 Essar Power Hazira Limited (EPHL), which is under Essar Power’s portfolio, completed six years of commercial operations of Unit 1 this month. With an aim to provide uninterrupted and dedicated power supply to a 10 MTPA integrated steel plant, EPHL synchronised and commercialised its Unit 1 in July, 2015. After stabilising operations for the unit, the team soon got working on Unit 2 which was synchronised in record-53 days, right from IBR certification to the synchronisation. The team declared commercial operations of Unit 2 in November, 2016.

In these six years, EPHL reached many highs in terms of instantaneous generation (325MW), average generation of the day (307.9MW), monthly generation (2017MU), etc. However, what makes it stand out is how the plant consumes waste of the steel plant in the form of Corex Coal fines and Corex gas to produce power. The use of Corex gas helps the steel plant avoid flaring the gas, making EPHL a waste-to-energy power producer. EPHL’s evolution to a waste-to-energy power plant is a case-in-point for such green transformations Essar is bringing in its businesses.

EPHL is part of Essar Power, which is India’s first private sector independent power producer with a power generating capacity of 2,100 MW across four plants in India and Canada. The company also has a 465-km interstate transmission system which spans across three Indian states. Essar Power forms part of the energy portfolio of Essar Global Fund Limited (EGFL), whose investments are managed by Essar Capital. Guided by ESG (Environment, Social and Governance) principles for all its investments, Essar is either transforming its businesses to being green, or is investing in sector-transforming green businesses. The company’s investments in Hydrogen, Renewables and Green Gas production show a clear focus towards strengthening the sustainability aspects of its portfolio.