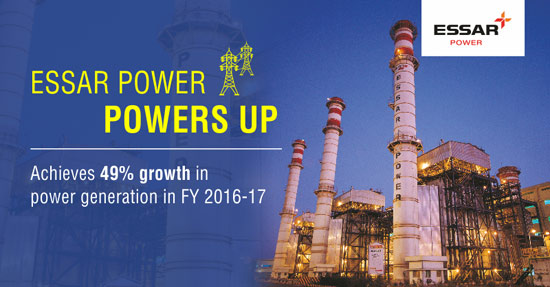 Mumbai, 06 April 2017: Essar Power Limited has delivered a strong operational performance in FY 2016-17. While it generated 49% more power in the fiscal, the company also added 165 MW capacity to its portfolio by commissioning one unit each at its Paradip and Hazira plants. The generation increased by 57% year-on-year in the quarter ending 31 March 2017.

In the 2016-17 financial year, Essar Power’s Mahan plant resumed operations after a gap of 19 months. Operations restarted at the beginning of the financial year and have continued without interruption banking on e-auction coal provided by Coal India Limited. Essar Power MP Ltd, the company that operates the Mahan plant, procured over 3 million tonnes of coal through the e-auction route in FY 2016-17.

Essar Power’s operational capacity in India now stands at 4,755 MW. The company is currently developing the 1,200 MW Tori plant in Jharkhand and the remaining 2×30 MW units in Paradip. Essar Power’s total power generation capacity when these two plants come on stream will be 6,100 MW (including the 85 MW plant that is operational in Algoma, Canada).

Speaking on the performance, Mr KVB Reddy, CEO, Essar Power, said: “Almost 80 percent of our planned capacity of 6,100 MW is now operational with eight out of nine plants up and running. The initiatives of the ministries of Power and Coal in the last fiscal provided a fillip to the sector, helping us restart operations at the Mahan plant. Domestic coal auctions have helped mitigate the issue of coal availability. Though the sector is firmly on the path of revival, the Government of India must consider reducing interest rates that currently make most power projects financially unviable. Measures like the RBI’s 5/25 scheme will help optimise power generation costs.”

About Essar Power
Essar Power Ltd is one of India’s largest private sector power producers with over 20 years of operating track record. It owns power plants in India and Canada with a total planned generation capacity of 6,100 MW, of which 4,840 MW is operational. Of the total operational capacity, 3,240 MW is coal-based, while 1,600 MW is gas-based. The operating plants in India are at Mahan in M.P., Hazira, Salaya & Vadinar in Gujarat and Paradeep in Orissa. A 1,200 MW coal based power plant at Tori in Jharkhand state is under development