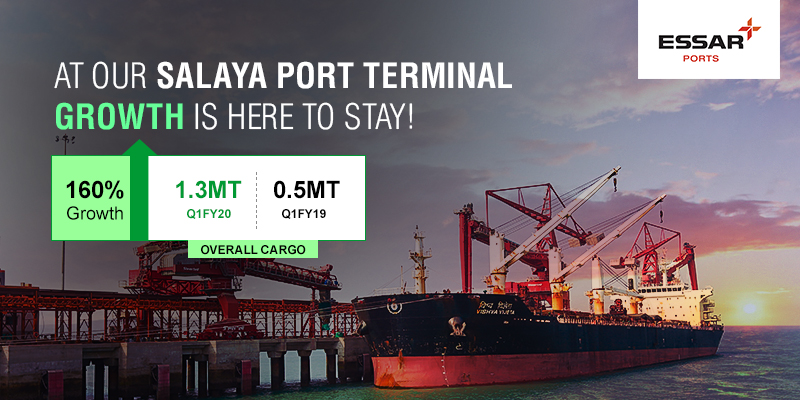 Salaya, 07 August 2019: Essar Ports’ 20 MTPA Essar Bulk Terminal Salaya Ltd (EBTSL), which operates the deepest draft terminal in Gujarat’s Saurashtra region, has clocked a cargo throughput of 1.3 MT (million tonnes) in the quarter ended 30 June 2019. The performance marks not only a 160% growth in cargo handling over the corresponding quarter in the previous fiscal, but is also the best throughput achieved since the terminal’s commissioning in 2018.

With the terminal integrated 1,200 MW power plant (Essar Power Gujarat) resuming operations, EBTSL is hopeful of a significant boost to its topline and cargo throughput in the subsequent quarters this year. The integrated Salaya Power Plant requires ~4 MMT of coal every year.

The Salaya Port Terminal, the first deep-draft terminal in the Saurashtra region, has been designed to berth up to Capesize vessels with a vessel turnaround time benchmarked with the world’s best, thus offering a competitive advantage to the local industry of the region. The Salaya Port Terminal is an all-weather terminal and is already one of the most preferred destination for shipment of dry bulk cargo in the Saurashtra region. It is capable of handling commodities like coal, bauxite, limestone, fertilizer, etc. and has the flexibility to both import and export cargo. The mechanised stockyard integrated with Salaya Port Terminal is 50 km from Jamnagar (towards Okha Highway) and is well connected with the Jamnagar-Okha State Highway.

Essar Ports is one of India’s largest private sector port and terminal developers and operators. It has invested Rs 11,000 crore in developing world-class terminals in three Indian states. Its current operations span four terminals with a combined capacity of 110 MTPA, which is roughly 5 percent of India’s port capacity. The Company is a leader in the non-containerized bulk cargo space. Having clocked a throughput of 40 MT in FY19, Essar Ports is expecting to handle over 60 MT in the current financial year.

All Essar Ports terminals use advanced cargo handling infrastructure and are equipped to double capacity in the near to medium term. The Company is focussed on not only enhancing cargo throughput, but also on ramping up capacity and contributing meaningfully to the Government of India’s ambitious target of developing 3,130 MT of port capacity in the country by 2020.

Outside India, Essar’s port assets include a liquid terminal in the UK and a coal terminal which is in development stage at Mozambique’s Beira port.