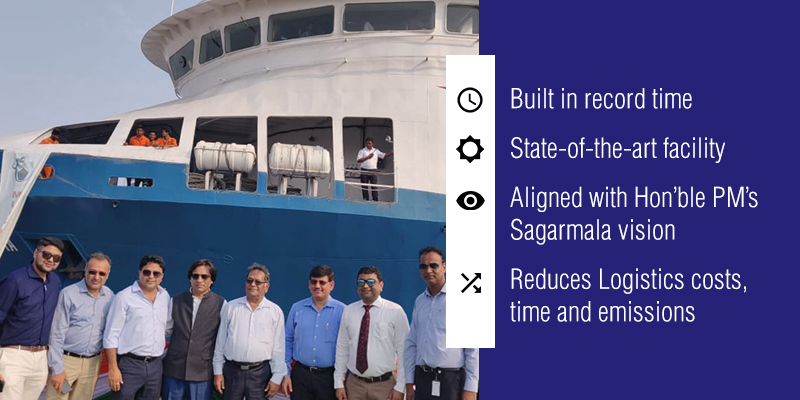 Hazira, 15 November 2019: Essar Bulk Terminal Ltd (EBTL), a part of Essar Ports, said it has completed work on the Passenger Ferry Terminal that has paved the way for a cruise-based passenger ferry service, commencing today, between Hazira Port in Surat and Bandra-Worli Sea Link in Mumbai. The Hazira-based terminal will also lead to ferry services being offered on other routes in the future, revolutionising coastal transportation in India.

Phase I of the terminal project will focus on the movement of passengers between Hazira in Surat to India’s financial capital, Mumbai. While the service is a significant addition to air-, road-, and rail-based connectivity between Surat and Mumbai, the plan is to extend it to other coastal locations in Gujarat, thus reducing road congestion, fuel consumption and air pollution.

The Hazira Passenger Ferry Terminal is the third terminal of its kind to be built by an Essar company.

“We feel privileged to be able to contribute to the Ro-Ro ferry project in Gujarat, which has set a worthy precedent for the rest of the country. It has given shape to our honourable Prime Minister’s vision of Sagarmala, which envisages efficient cargo and passenger movement through the coastal route. Though we are a commercial port operator, we were keen to build this passenger terminal project in the spirit of giving back to the larger community. The ferry service will be a huge boost to tourism in Gujarat. We look forward to contributing to similar projects that will help unleash the tremendous potential of coastal transport in India by using the country’s extensive network of inland waterways.” said Mr Rajiv Agarwal, MD & CEO, Essar Ports.

Spurred by the PM’s vision, Gujarat Maritime Board (GMB) gave its permission to EBTL to develop and operate a Passenger Ferry Terminal at Hazira, where the Company also operates a 50 MTPA (million tonnes per annum) dry bulk cargo terminal.  EBTL took charge of designing and constructing the facility, which includes both marine structures, like landing platform, passenger walkway and floating pontoon, as well as shore-based facilities, like a terminal building, cafeteria and vehicle parking area. The project was completed in record time using Essar’s in-house expertise and resources. Essar’s own dredgers were used, for instance, to ensure the draft required for operating the terminal.

“I congratulate my team for building the passenger terminal in just eight months after receiving GMB’s permission to initiate this project. It was a challenging task that tested our technical expertise and project execution capabilities. We are proud to have commissioned the project in record time to pave the way for the launch of this revolutionary ferry service,” said Capt. Subhas Das, CEO-EBTL.

Essar Ports is one of India’s largest private sector port and terminal developers and operators. It has invested INR 11,000 crore in developing world-class terminals in three Indian states. Its current operations span four terminals with a combined capacity of 110 MTPA, which is roughly 5 percent of India’s port capacity. The Company is a leader in the non-containerised bulk cargo space. Having clocked a throughput of 40 MT in FY19, Essar Ports is expecting to handle over 60 MT in the current financial year.

All Essar Ports terminals are equipped with advanced cargo handling infrastructure and are well poised to double capacity in the near to medium term. The Company is working in tandem with the Government of India to meet its ambitious target of developing 3,130 MT of port capacity in the country by 2020.

Outside India, Essar’s port assets include a liquid terminal in the UK and a coal berth that is in the development stage at Mozambique’s Beira port.