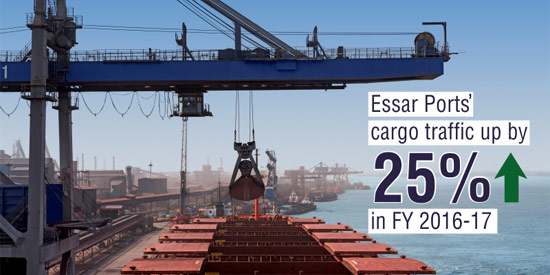 Mumbai, 5 April 2017: Essar Ports, which operates port terminals on the east and west coasts of India, has recorded a 25 percent growth in cargo traffic in FY 2016-17.

The substantial growth in cargo traffic at these ports indicates the heightened activity and capacity utiliation at Essar Steel.

Commenting on the performance, Mr Rajiv Agarwal, CEO & MD, Essar Ports, said: “I am delighted with the robust growth in cargo traffic across our ports and terminals in FY17. I am especially happy about the remarkable growth in bulk cargo because that is where the future lies. We expect higher growth in the coming years because of increasing capacity utilisation by our anchor customers and heightened economic activity in the country.”

About Essar Ports
Essar Ports is one of the largest port companies of India, with a current capacity of 140 MTPA. The capacity is being expanded to 194 MTPA over the next few years. Essar Ports has five operational port terminals at Hazira, Vadinar, Paradip, Salaya and Visakhapatnam.

The Company is expanding its Hazira port capacity by 20 MTPA, which will take the capacity to 50 MTPA. The Company is also undertaking capacity addition of iron ore berths at Visakhapatnam Port with a total capacity of 16 MTPA.