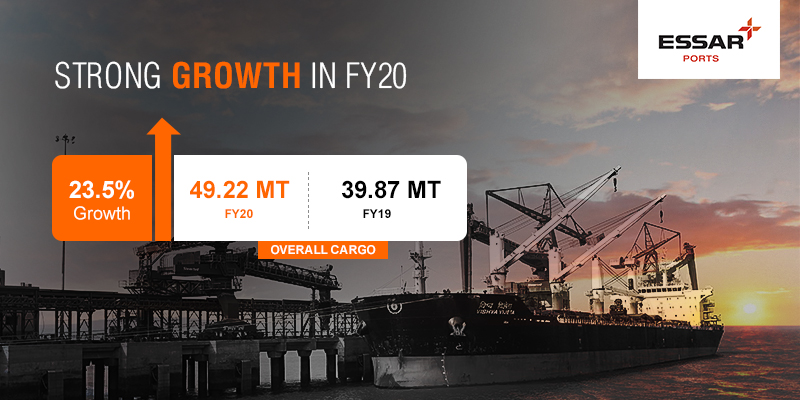 In terms of their fourth quarter performance, the terminals recorded a 4.63% growth in cargo, with a throughput of 11.08 MT.

Speaking on the performance, Mr Rajiv Agarwal, MD & CEO, Essar Ports Ltd, said: “Our focus on driving operational efficiencies and optimising operations has helped in recording strong growth. The heightened activity in the Indian economy has helped us consistently surpass the average sectorial growth rate. While the mitigation measures adopted to control the Covid-19 outbreak have given rise to several limitations, the high mechanization at our facilities have enabled them to continue to operate and service customers, thus allowing them to meet the cargo handling requirements of the nation.”

Essar Ports is one of India’s largest private sector port and terminal developers and operators. It has invested Rs 11,000 crore in developing world-class terminals in three Indian states. Its current operations span four terminals with a combined capacity of 110 MTPA, which is roughly 5 percent of India’s port capacity. The Company is a leader in the non-containerised bulk cargo space.

All Essar Ports terminals are equipped with advanced cargo handling infrastructure and are well poised to double capacity in the near to medium term. The Company is working in tandem with the Government of India to meet its ambitious target of becoming US $5 trillion economy.

Outside India, Essar’s ports business operates an oil terminal in Stanlow, United Kingdom, and has a coal berth in the development stage at Mozambique’s Beira port.