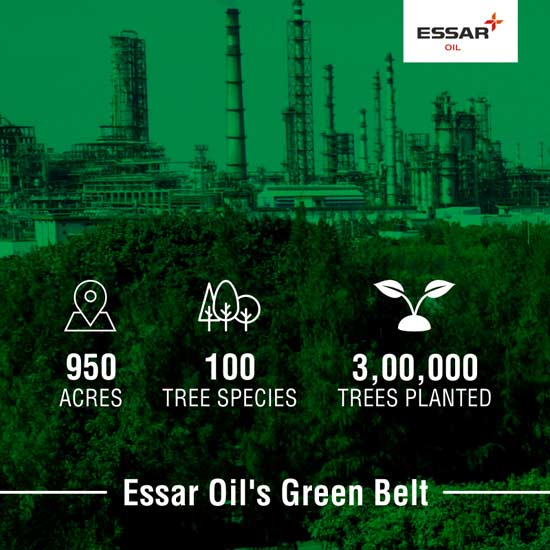 Essar Oil’s Vadinar Refinery is a well maintained industrial site. It is an integrated infrastructure with a green belt developed within its premise. The green belt is a forest with more than 3 lakh trees of about 100 species,   spread over more than 950 acres. Within the belt, there is also a thriving mango orchard which produces Gujarat’s famous ‘Kesar’ variety. This green belt is a result of Essar’s “Think Green Go Green” campaign.

When Vadinar was finalised as the location to set up Essar Oil’s refinery, the area was arid as the soil was saline. The average rainfall was low, temperature was high, and the flow of wind was the main obstructing factor in creating the green belt. However, the horticulture experts from Essar took up the challenge and the green belt was created within a short span of time. These achievements have been recognized at various environment forums.

The diversity of the trees found in the green belt is astounding. Among the 100 species of trees planted, you can find indigenous as well as foreign species.
Some of these are: Neem, Karanj, Peltoforum  (Sonmohar), Aus Babool, Cassid, Karanj, Tabubiya, Alstonia, Casurina, Bahumia, Ambali, Goras Ambli, Areca palm, Trichhoma spp., Thrivetia (Karen), Nerium (Karen), Plumerai (Champa), Drumbstick, Gulmohar, Ashopalav, Cassia fistula or Garmalo, Bunyan tree (Vad), Umbaro ,Parijatak etc. These trees are an integral part of Essar’s Industrial complex and make the environment around the site peaceful and relaxing.

The green belt also boasts of more than 1 lakh mango trees. The other fruit species nurtured in the orchard are Guava, Jamun, Pomegranate, Sapota, Fig, Dragon fruit, Apple, Custard Apple, Tamarind Almond. In all more than 20 species of fruits produced here.  The sea wind blowing with speed of 20 to 60 k.m is a big obstacle to maintain the plantation. Hence, a tree wall of Casurina (Sharu) has been created around the belt to shield the trees from harsh sea winds. 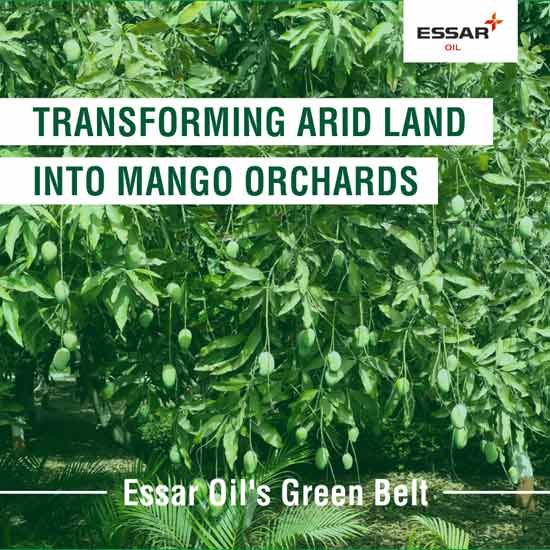 Essar Oil has adopted drip irrigation system for the green belt, which is helpful in conserving almost 40 to 60 per cent water. Fresh water is used for cultivating fruits and vegetables. The trees are watered using treated water from the refinery’s treatment plant. The vast natural greenery created in the area has become a natural habitat for peacocks, cuckoos, crows and many other birds.

Along with conservation of the environment, Essar Oil’s green belt has become a boon to the local people.  It has created employment for 200 to 300 people; most of them are local people and farmers. For conservation of the green belt with modern and scientific manner, an expert team of horticulturists has been recruited. This abundant greenery has been recognized at world level and the green belt has received awards from various institutions, which is matter of great pride for Essar Oil.