Essar Oil UK plan to invest $250 million in capex and maintenance at Stanlow to ramp up throughput, improve yields and revenues 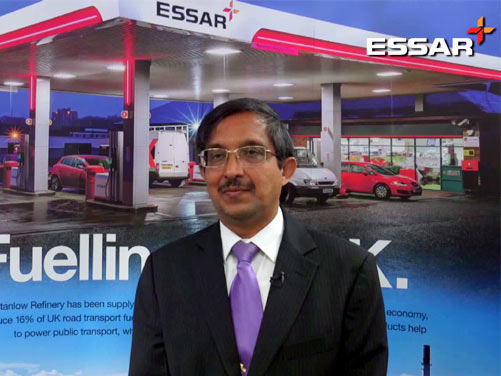 Stanlow margins over the KBC Benchmark improved to $4.2/bbl in FY17 due to ongoing margin booster initiatives, despite the industry benchmark dropping $2.1/bbl from the previous year.

The refinery, which as a key national asset produces 16% of the UK’s road transport fuel demand, processed 9.09 MMT of crude, a 1.3% increase on the previous year’s 8.97 MMT.

Essar Oil UK Non-Executive Chairman, Prashant Ruia, said: “The major investment we have confirmed in Stanlow will materially increase throughput and further grow revenues, building on the tremendous progress we have made in turning around the business over the past six years.  It also demonstrates Essar’s commitment to remain invested in the oil and gas sector.”

Essar Oil UK Chief Executive Officer, S. Thangapandian, commented:  “Essar has committed this year to a significant multi-million dollar capex investment in the Tiger Cub project at Stanlow to deliver improved yields across the product slate and drive revenue growth.  In addition, the continued ambitious expansion of our UK retail network and direct aviation fuel supply business are also important strategic elements in the drive to build a fully integrated downstream energy company.  This is on the back of a strong FY17 performance, following record results posted the previous year.  Although we saw a marked $2.1/bbl decrease in the wider industry benchmark margin, our excellent operational reliability and ongoing margin booster projects saw our own margins reduce by less than half this amount, which demonstrates the enormous progress made within the business.”

Essar Oil UK Chief Financial Officer, Sampath P, said:  “With a strong financial base and key improvement projects set to be completed this fiscal, we are now looking forward to the continued growth of the company with an increased commercial focus.  Despite a weaker market, this is another impressive set of results that has helped to build a business with a net worth of almost a billion dollars.”

Including FY18, Essar will have invested over $800 million since acquiring Stanlow in July 2011, helping to turnaround the business and deliver significant improvement in the following areas:

During FY17, a number of new monthly records were established for the highest CD4 Distiller crude throughput under Essar ownership, the highest ever amount of residue upgraded via Europe’s largest Catalytic Cracker and the highest ever production levels of diesel, alkylate and propylene.

Already a major player in the wholesale supply of Jet A-1 to UK airports, Essar secured contracts for the direct supply of aviation fuel to major airlines such as Emirates, Etihad, Jet2.com and Oman Air.

An award winning entry to the UK retail market has seen the Essar network grow to 36 stations, with planning permission secured for the first company owned site to be opened later this year.

About Essar Oil UK
Essar Oil (UK) Limited is a subsidiary of Essar Energy Limited, which owns and operates the Stanlow Refinery located on the south side of the Mersey Estuary near Liverpool.  Stanlow produces 16% of UK road transport fuels, including 3 billion litres of petrol, 4.4 billion litres of diesel and 2 billion litres of jet fuel per year.