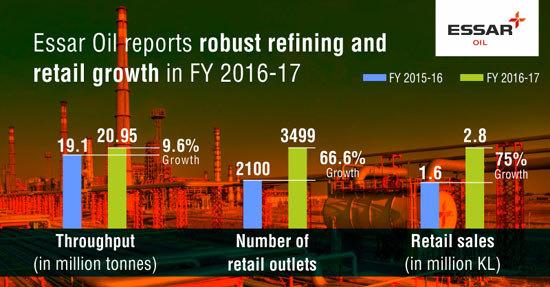 Over the years, Essar Oil has invested in a series of upgrades and modifications at the 20 million tonne Vadinar refinery to maximise margins. On 15 October 2015, the refinery successfully completed a 28-day planned shutdown—a period when the VGO-HT unit was converted into a mild Hydrocracker unit to enable the refinery to convert the entire VGO (Vacuum Gas Oil) into higher margin products. The company also modified its crude blend window to enable the refinery to process higher volumes of ultra-heavy and high acidic crudes. During the financial year ended 31 March 2017, the refinery converted most of its VGO into Gasoil and other value-added products. The crude API also improved to 23.3, which helped in overall reduction in crude cost, thus enhancing refinery margins.

Mr Lalit Kumar Gupta, MD & CEO, Essar Oil, said: “This year, we achieved the highest ever throughput since the commencement of commercial operations at the Vadinar Refinery in May 2008. Our retail growth was quite remarkable and we received Platts’ Global Energy Award for Downstream Company of the Year in December. I congratulate the entire Essar Oil team for delivering such a stellar performance.”

About Essar Oil Limited
Essar Oil is a fully integrated oil & gas company of international scale with strong presence across the hydrocarbon value chain—from exploration & production to refining and oil retail. The company owns India’s second largest single location refinery with a capacity of 20 million tonnes and a complexity of 11.8, which is amongst the highest globally. The refinery is supported by a 58 million tonne deep draft port and captive power plants of 1,010 MW capacity. The company has a portfolio of onshore and offshore oil & gas blocks with about 1.7 billion barrels of oil equivalent in reserves & resources. There are 3,499 Essar-branded oil retail outlets in various parts of India with another 2,631 under various stages of implementation.