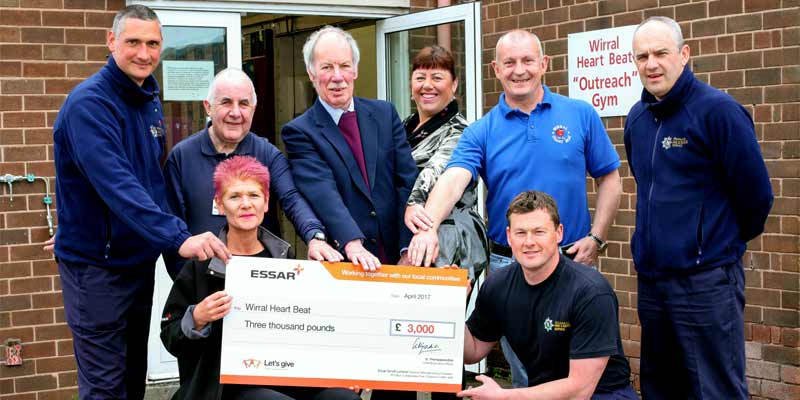 Record breaking safety milestones at the Essar oil refinery at Stanlow have led to charitable donations. For the first time in its 60 year history, the refinery achieved three million hours without a recordable injury.

This record led to donations including £3,000 each to the Steps Charity in north Cheshire and The Seafarers Centre in Liverpool. The donations came through the refinery’s ‘Let’s Give’ programme which links safety milestones and charitable giving with nominations made by employees and on site business partners who have had personal involvement with the organisation concerned.

Steps, a national charity which supports all those who are affected by congenital lower limb conditions, was nominated by Paul Jones, health, safety, environment and quality advisor for Hertel at Stanlow.

Paul’s wife, Lorraine, suffers from club foot and he quoted: “The Steps charity is a vital service for those affected by childhood leg conditions.”

Neil Jones, Steps chief executive, said: “We are grateful to Essar for this generous donation. The £3,000 will certainly help hundreds of families.”

The Seafarers Centre was nominated by Mark Thompson, marine manager at Essar. Mark said: “I have worked at sea for most of my career and now alongside those who do. I have seen the benefit of the Seafarers centres all over the world and the great service that is offered to those who visit. Many of the seafarers from our cargo deliveries at Stanlow and Tranmere use the services of the centre in Liverpool and it is fantastic to be able to provide some financial support to keep the service going.”

John Wilson, chief executive at the centre, explained: “We are delighted to receive such a generous donation from Essar. The money will go towards a new hub that we are opening at Eastham. The funds received will be used to buy a pool table, furnishings, computer and wi-fi.”

Support for the Wirral Heart Beat charity came when Stanlow clocked up seven million hours without a lost time injury. The charity provides ongoing support to those recovering from cardiac hospital treatment and rehabilitation through outreach gyms run with the assistance and cooperation of Merseyside Fire and Rescue Service. Paul Nelson, a technician operator at Essar, nominated the charity explaining he had been put in contact with Wirral Heart Beat following a heart operation 16 years ago. The charity had provided ‘real practical support’. Wirral Heart Beat chairman Ian Carson said: “We depend entirely on volunteers to run the centres. We are extremely grateful to Essar for their donation which will help us to keep our centres maintained as well as investing in new equipment for our members to use.”