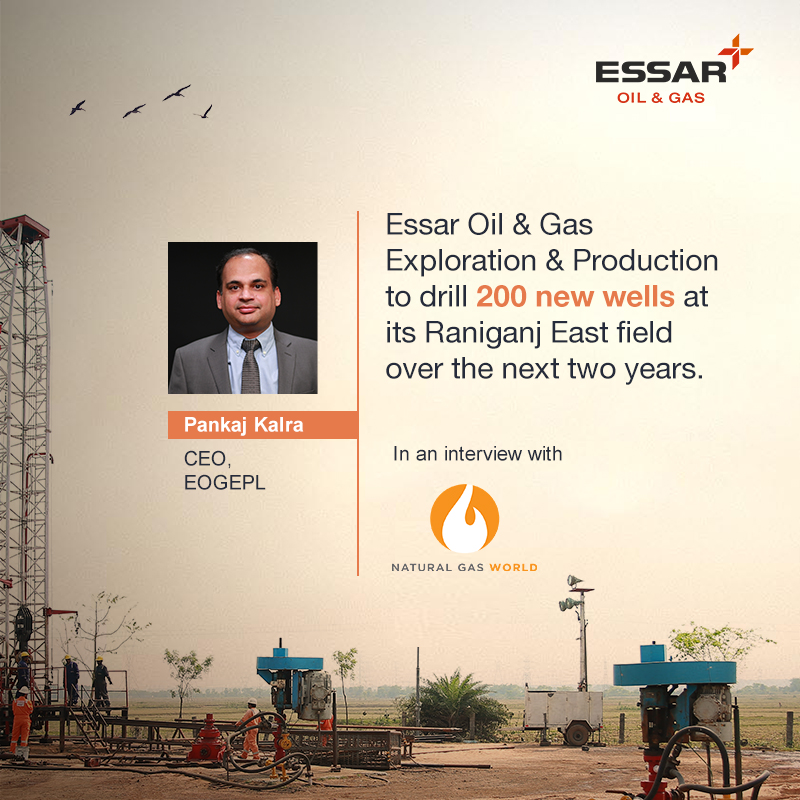 EOGEPL has invested over 55bn rupees in its CBM project to drill 348 wells. At present, 292 wells are operational with balance wells being serviced to put on production over next few months. The company has long term contract with state-owned gas marketing firm Gail, which is the main customer.

Raniganj CBM field, located in the eastern Indian state of West Bengal, has total resource of 4 trillion ft3 out of which 1.37 trillion ft3 gas is recoverable. “With existing 348 wells, we have reached CBM output of 0.82mn m3/day. We are aiming to reach 1mn m3/day over next few months,” Kalra says.

Apart from CBM, the company also has compressed natural gas facility of 75,000 m3/day which is sold to the customers who are still not linked to the pipeline.

EOGEPL is already connected to the Urja Ganga pipeline, which is connected to the national grid since May 2021. The company has an agreement with Gail to supply the CBM through the gas pipeline.

“With Urja Ganga pipeline connectivity, the company is able to supply the gas to the Dobhi-Durgapur stretch of the gas grid which is not only benefitting West Bengal but also 10 districts of Bihar and Jharkhand,” Kalra says.

Post connectivity with Gail pipeline last year, EOGEPL has been continuously ramping up the production from 0.72mn m3/day in April 2021 to 0.83mn m3/day now.

In order to encourage greater development, the Indian government changed the rules in 2018 to permit the exploration and production of all types of hydrocarbons including shale gas under existing CBM contracts.

Kalra says that EOGEPL is also exploring the shale gas potential of Raniganj block. The block has expected shale gas reserves of more than 8 trillion ft3, out of which around 1.6 trillion ft3 can be recovered.

EOGEPL believes that Indian Gas Exchange (IGX), which was launched in 2020, will help realise the demand led price realisation to the CBM producers and for buyers, and will help them to tie-up gas requirements on short term basis.

“While Indian Gas Exchange is still at nascent stage, it is a win-win situation for both customers and producers,” Kalra says. “Ease of trade, payment security and transparency will encourage and boost both offshore and on-shore gas producers as well.  This step will definitely propel India’s goal of becoming a gas based economy.”

While India has the fourth largest coal reserves in the world, the CBM industry has largely remained unexplored in the country. The true potential of this industry is yet to be realised, says Kalra.

He argues that the biggest challenge for Indian CBM industry is the lack of indigenous technology and expertise.

“In other countries like the US, China and Australia, the companies in CBM business are well supported by technology, breakthrough innovations and expertise,” he says. “Essar is one of the biggest players in the CBM market. The unavoidable delay in the Urja Ganga gas pipeline had caused numerous challenges for us as well. However, steady efforts and technological applications brought us back in the game.”