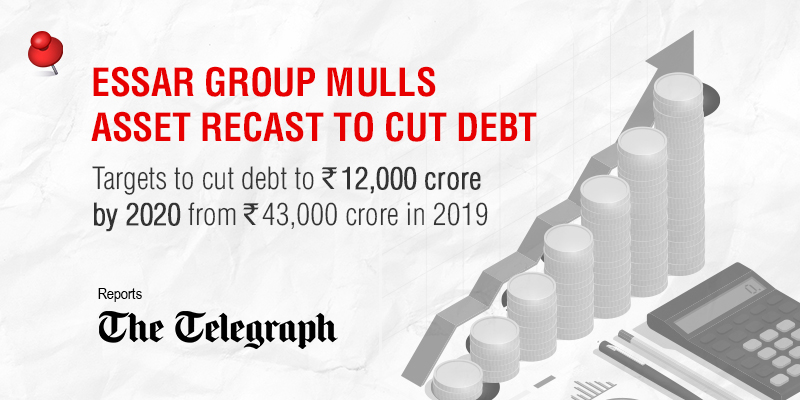 Essar Group has set an ambitious target to reduce debt further by two-third before the end of December by ‘restructuring’ its portfolio spanning power, shipping and infrastructure projects.

The “substantially lighter balance sheet” will help the group to prepare for the next phase of growth, a letter written by founders Shashi and Ravi Ruia said.

Addressed to bankers, bureaucrats and politicians, the letter claimed that Essar Group would have a combined turnover of Rs 100,000 crore with businesses across energy, mining, power, shipping and infrastructure. The letter comes months after it had to let go of Essar Steel to a consortium of ArcelorMittal and Nippon Steel, enabling Indian lenders to recoup Rs 42,000 crore ($6 million) of bad loans.

The move will also break a perception that Essar has become a pale shadow of the past, when the group was a major player in core sectors such as oil, telecom and steel.

“Armed with a substantially lighter balance sheet, Essar is now well poised to embark on a new phase of growth, while driving growth in its existing portfolio. Essar will continue to use its entrepreneurial skills, vast pool of human resources, and decades of experience and innovation in pursuing fresh opportunities and creating value for all its stakeholders,” the letter, reviewed by The Telegraph, read.

Essar Global Fund is now the holding company of the group, which is managed by investment manager Essar Capital. This entity has in turn invested in a variety of assets.

An official of the group did not elaborate how the ‘planned debt reduction’ would play out. Even though he emphasised that Essar would undertake a restructuring exercise, he denied any plan of further asset sale.

Earlier this year, Edelweiss Asset Reconstruction Company took over Bhander Power Plant from Essar under the Securitisation and Reconstruction of Financial Assets and Enforcement of Securities Interest (SARFAESI) Act for Rs 475 crore and sold it to AM/NS India (formerly Essar Steel) for around Rs 500 crore.

This transaction and a few more on the project side may have helped the group to cut debt by another Rs 1,500-2,000 crore since December.

A big chunk of the rejig will come from the power portfolio where the debt burden will come down from Rs 20,000 crore to Rs 7,500 crore. Mahan Power Project alone carries a burden of Rs 7,500 crore. The promoters are willing to strike a deal with the lenders to pay off the debt at a discount.

“The promoters plan to bring equity to effect restructuring of the outstanding loan,” a source in Essar said.