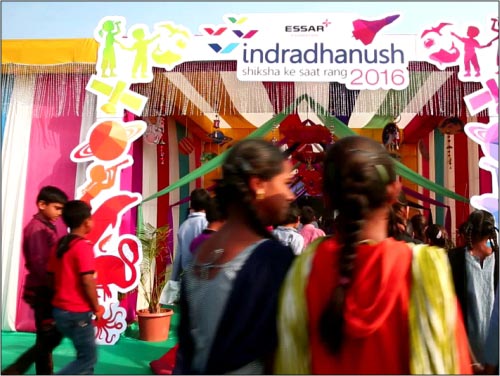 The Foundation organised the two-day event in collaboration with CEE (Centre for Environment Education), who acted as the Knowledge Partner at Indradhanush. This event was attended by over 3,000 students and close to a 100 teachers from 32 schools.

The opening ceremony was attended by celebrated astronomer, Mr JJ Rawal, Mr Lalit K Gupta, MD & CEO, Essar Oil, Mr C Manoharan, Director of Refinery and Mr Deepak Arora, CEO, Essar Foundation. Speaking about the initiative, Mr Lalit Gupta said: “Indradhanush is an initiative that is enabling young students to learn in different ways. And the Foundation is known to deploy initiatives in a thoughtful, and unique manner. This year we have seen astronomy and biodiversity become the focus of the event, and appreciate the work that has gone into bringing this knowledge to the attendees in a creative manner.”

Emphasising the importance of collective effort, Mr Deepak Arora spoke about minds coming together to learn, and the unified effort achieving greater heights. Indradhanush is built upon this very philosophy, bringing 11 organisations, all experts in their field, to provide children with a holistic learning experience.

Subjects like biodiversity and astronomy were brought to life not only through exhibits, and models, but also educational games, and sing-alongs. Some of the stalls that were most popular included a mobile planetarium, set up by Ankur Hobby Centre, a screening of the 3D film, Deep Sea, and the launch of a rocket, which enthralled the visitors.

The two-day event came to a close with a play performed by the students, and was attended by local dignitaries

PreviousPrevious post:Steel made in India, made for India
NextNext post:Essar Foundation in top 50 of Times Ascent’s dream company to work for in 2016