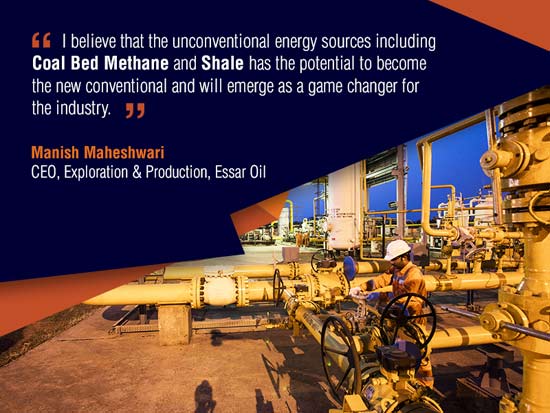 Essar Energy is India’s largest coalbed methane player, with production of 1.1 million cubic metres per day of gas from its Raniganj East block, and is expected to significantly scale up output in the next year or two, writes Nishant Ugal.

Essar believes the recent measures taken by the company have enhanced productivity at its West Bengal CBM asset.

“We have taken several initiatives in the past 12 months and these have really paid of. Our average productivity per well has more than doubled,” says Manish Maheshwari, chief executive of Essar Energy’s E&P business.

Maheshwari claims that Essar has come a long way in terms of improving the average productivity at the CBM block, which has gone up significantly to 5500 cubic metres per day per well, compared to 2200 cmd during the initial production period.

Essar is hopeful it can further ramp up production at this asset over the next couple of years, de-spite slower than expected production growth in the past.

“Today, through the actions we are taking, we believe that we will be able to increase our production to (between) 1.8 MMcmd and  2 MMcmd by the end of this fiscal year and then to 3 MMcmd by the middle of fiscal year 2017-2018,” he says.

Maheshwari says that developing the Raniganj asset has been much more challenging compared to other CBM assets globally.

However, Maheshwari adds that the company’s experience has contributed to the recent production growth.

Essar has drilled a total of 320 wells in the Raniganj East block, from which it is producing from about 200 wells, while the others are in a de-watering stage.

Maheshwari says Essar applied a new approach, different from conventional E&P methods, while carrying out drilling and completion activities at the CBM block.

“If we would have continued with the conventional E&P process then it would have been damaging for us… to have an economically sustainable project,” he explains. Maheshwari also believes there are strong synergies that could be drawn between CBM and other unconventional sources, including shale gas.

However, although India’s new Hydrocarbon Exploration & Li-censing Policy will allow the exploitation of conventional and unconventional plays on blocks, existing CBM operators such as Essar cannot do the same.

The government is considering ways and means to allow existing operators to explore different forms of hydrocarbons but no decision has been taken yet. Essar holds Five CBM blocks totalling 2700 square kilometers in India that have combined gas-in-place of about 17 Bcm.

The company recently acquired the “consent to establish” for its Rajmahal CBM block in the state of Jharkhand, where activities are likely to begin soon.