Committed to multiply our CBM production for a clean, green and Atma-Nirbhar India in energy sector: Mr. Santosh Chandra 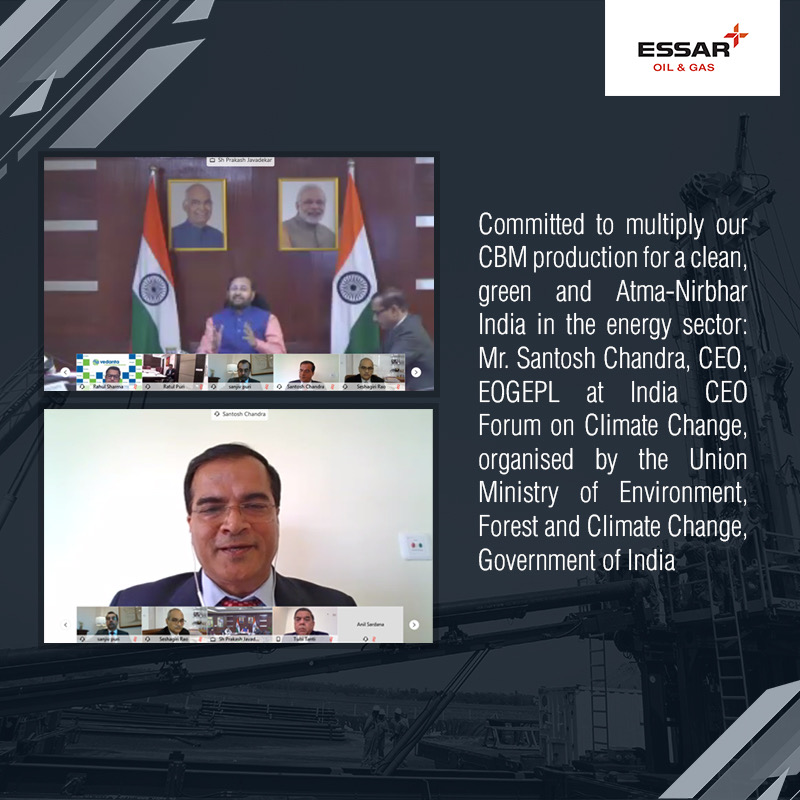 Essar, India’s leading private coal seam gas producer, has reiterated its commitment towards providing clean and green energy to the people of India and help the country become Atma-Nirbhar in the energy sector.

Mr. Santosh Chandra, CEO, Essar Oil and Gas Exploration and Production Ltd (EOGEPL), made the above commitment at India CEO forum on Climate Change, a virtual event organised by the Union Ministry of Environment, Forest and Climate Change, on November 5, 2020.

“Govt. of India has provided thrust to the Natural Gas sector by several dedicated Policy and Sectoral reforms, which will benefit Natural gas producers and thus we are committed to multiply our CBM (and shale gas) production towards our gas based economy and build ‘’Atma-Nirbhar Bharat’’ in energy,” Mr. Chandra said in his address to the virtual august meeting, which was chaired by Mr Prakash Javadekar, Union Minister for Environment, Forest and Climate Change and attended by other industry stalwart CEOs and industrialists from India Inc.

In his address, Mr. Chandra focused on the fact that Essar has always been conscious of the impact on environment by its corporate actions and in fact has created immense value in the social and environment domain, especially led by the (CBM) gas production currently and shale gas production in the future. As we all know, CBM is one of the cleanest and greenest fossil fuel produced and EOGEPL holds a pole position in its production in the country.

“We will be strongly focused on our sustainability efforts and we endorse the Indian government’s declaration on climate change. We have resolved to formulate collective, strong and effective steps in our projects to help combat climate change with benefits for the present and future generations,” Mr. Chandra emphasized.

He also added that EOGEPL, a pioneer of unconventional Hydrocarbon sector always works together with holistic participation along with local and state authorities for domain activities which are beyond project areas.

About 60 percent of methane emissions are due to human activities. EOGEPL has identified two key programmes to address these issues — Sufalam: a systematic rice intensification programme under which it has reached out to over 15 farmers in the Raniganj project area given that traditional method of rice cultivation leads to 12 percent of global methane emissions. Apart from emissions, the scheme has also improved crop yield and cut the cost of cultivation.

Other projects undertaken are enteric fermentation, which is reduction of about 100 metric tonnes of methane over life of a project, involving 125 cattle in the phase 1, promotion of bio-gas plants and benevolent supply of CBM as fuel for preparing mid-day meal to a School, thus replacing the traditional wood-fired stove.

EOGEPL is a niche upstream E&P Company focused in the development of Unconventional Hydrocarbon Gas – primarily CBM in India and has 15 trillion cubic feet of Unconventional gas in its portfolio. The company’s flagship asset is its Raniganj East CBM field and out of the few CBM blocks, the company has achieve commerciality and crossed 1.0 mmscmd of gas production. Separately, EOGEPL is continuously working towards creation of the Raniganj block as a model of ‘’social license’’ of ‘’Sustainable CBM Development’’.

Mr Javadekar, in his address to the virtual conference, said India was amongst the few countries which was ‘2 degrees’ compliant and had taken many decisive actions to fight climate change across government as well private sector level, thus showcasing India’s commitment and resolve. He also released the declaration on Climate Change signed by 24 key industry captains of India Inc. and the government at the summit and termed it as a historic step by the country’s private sector.

“World says and preaches many things but to bring into practice is more difficult thing. I think today United Nations ecosystem and UNFCCC will take note of this initiative of India and its corporate world to adhere to and declare plans of their own carbon neutrality.”, Mr. Javadekar said.

The corporate sector espoused confidence and expressed their support towards a coordinated response by the Government and private sector on climate change which will help protect the country’s interests and ensure that India is on track towards meeting its climate change obligations under the Paris Agreement.

India is a signatory to the Paris Agreement under the United Nations Framework Convention on Climate Change. As part of its Nationally Determined Contribution (NDC), India has three quantitative climate change goals viz. reduction in the emissions intensity of Gross Domestic Product (GDP) by 33 to 35 percent by 2030 from 2005 level, achieving about 40 percent cumulative electric power installed capacity from non-fossil fuel based energy resources by 2030 and creating an additional carbon sink of 2.5 to 3 billion tonnes of carbon dioxide equivalent through additional forest and tree cover by 2030.