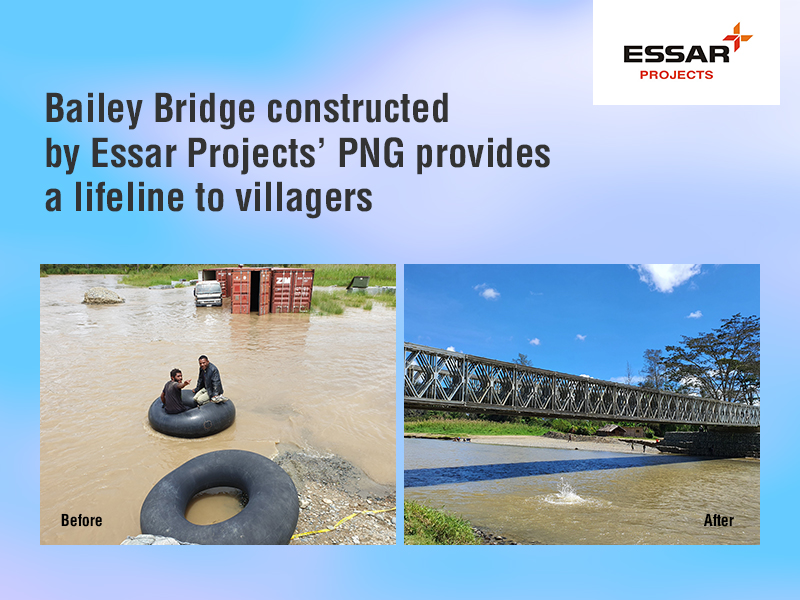 The project entailed all the execution challenges connected with working in tough hilly terrain, which were overcome through efficient planning. The 54 metre long and 6 metre wide Bailey bridge was prefabricated in the city of Lae as “ready to fix” parts comprising 18 bays of 3 metre length each. These were then transported to the site, in four 40 feet containers, over a distance of 416 km across rugged mountainous terrain known for frequent landslides and hindrances caused by frequent rain and floods. On the site, the bridge was assembled and then slide over a gravel platform with the help of pulleys erected for the purpose and fitted into desired position on the prior constructed abutments.

EPPNG team witnessed overflowing emotions of the local residents of Mugmamp as the bridge was being installed to connect their village with Kendeng. The bridge connecting Mugmamp with Kendeng has become a lifeline to the 6000 inhabitants of Mugmamp who are now be able to access basic government services. People had been virtually cut off after the earlier bridge was washed away by the Waghi river several years ago. Up to now residents were crossing the river on inflated tyre tubes!

In Papua New Guinea, Essar Projects has established its position as a prominent EPC player by executing challenging projects such as Komo Airport, Kapal Haus Provincial Headquarters, Jimi High Altitude Road, Mugmamp Bridge, only to name few. Essar Projects PNG continues to be an exemplary safety icon by achieving a cumulative safe man-hours of more than 9.5 million, without any mishaps. Essar Projects PNG is a torchbearer for promoting best HSE practices in the country through its various training programmes.