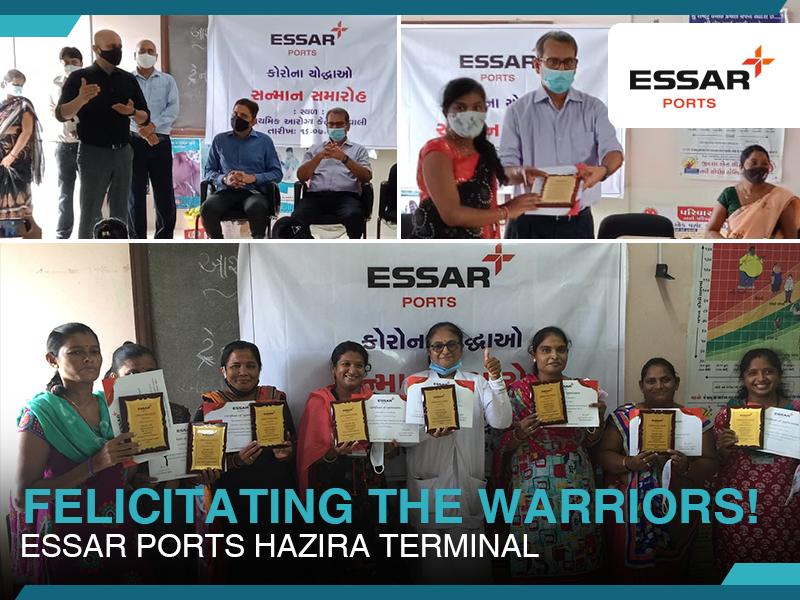 Essar Bulk Terminal Limited (EBTL) Hazira, organised a special awards programme at the Primary Health Centre, Suvali village on 16 July 2021, to recognise the dedication and commitment of a certain sect of Corona warriors, aka the healthcare workers from eight villages near Surat.

During these unprecedented times, healthcare workers such as doctors, nurses, technicians, transporters, pharmacists, etc. have been taking the risk, and putting themselves in the path of the virus, in order to serve the general public. The perseverance and courage shown by them undoubtedly deserves gratitude and admiration. Through the award ceremony, EBTL honoured 58 health workers from eight villages near Surat, namely – Hazira, Junagam, Suvali, Rajgari, Mora, Damka, Bhatlai & Vansva.

Essar Ports forms part of the infrastructure portfolio of Essar Global Fund Limited (EGFL), whose investments are managed by Essar Capital. ESG (Environment, Social and Governance) is at the core of all EGFL investments, and hence Essar encourages all its portfolio businesses to support community initiatives in all possible ways. Under the ‘Essar Cares’ initiative, the company distributed 20 lakh meals and 1.55 lakh medical supplies to support the Nation’s fight against Corona. It also set up a 100-bed Covid facility in Gujarat to support the state’s medical infrastructure in the face of the second wave. EGFL’s investee businesses have been doing their bit too at a site/plant level.

Through the pandemic, Essar Ports has been one of the first to step up and support the villages near its locations, be it through providing essential medical & food kits, medical assistance, infrastructure support to local institutions, etc. The company prides itself with the support it receives from the locals and strives to lend any assistance that may be required.

EBTL is a part of Essar Ports Limited, which is one of the largest private sector port and terminal developers & operators in India by capacity and throughput, with four operational terminals in India across Hazira and Salaya (in the state of Gujarat) on the west coast, and one each in Visakhapatnam and Paradip on the east coast. Current operational port terminal capacity in India is 110 MMTPA.